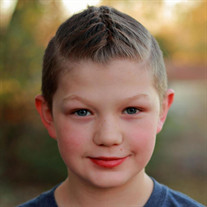 Service for Braxton Lee Landburg will be 2:00p.m., Wednesday, March 4, 2020 at First Baptist Church, Inola, burial will follow at Chouteau Cemetery. Friends may visit at the funeral home on Tuesday, March 3, from 2pm-8pm, with family receiving visitors from 5pm-8pm. Braxton passed away on Thursday, February 27, 2020 at home with his loving family by his side. He was 12 years old. Braxton was born September 15, 2007 in Claremore, Oklahoma to Jared Lee and Shelby Rayann (Sheats) Landburg, he attended school at Chouteau. He enjoyed his friends at school and like most boys, he loved video games, computers, Legos and robotics. Braxton was also a fisherman and spent many hours with his dad at their favorite fishing hole. He was the very creative at making up jokes and songs and was quite witty with a funny line that could have the room roaring with laughter. His likes were varied, he loved pickles and his go to drink was a vanilla Dr. Pepper from Sonic. Braxton loved the Lord and this was evident in his life, he had an understanding of what it was to have Jesus in his heart, his faith kept him through the hardest times. Even when he was not feeling well, he was most concerned that everyone else was ok. This wonderful son, brother and grandson will be missed by all who knew him. Those family members that survive include his parents Jared and Shelby Landburg; his sister Piper Landburg; his grandparents Jeff and Lisa Landburg, Danny and Kelly Jantz, Dale and Jody Wills; his great grandparents Robert West, Jan Landburg, and Pat McCarty; his aunts and uncles Jennifer Clark, Chris and Gina Wills, Josh and Jessica Smith, Kimberly Wills, Rachael Brown, Kiley Landburg, Zach and Amanda Trosky, Angie and Spencer Henderson, and J.R. and Ashley McGlasson; his cousins Jayden, Evie, Lillie, Mark, Acelynn, Draygan, Jacob, Zelma, Demetrius, Triston and Dena, Hannah and Seth, Emma, Ethan, Gabe, Carson, Liam, and Graham. Those who wish to honor Braxton's memory with a memorial contribution may do so by contributing to The Cure Starts Now Foundation, 10280 Chester Road, Cincinnati, Ohio 45215.

Service for Braxton Lee Landburg will be 2:00p.m., Wednesday, March 4, 2020 at First Baptist Church, Inola, burial will follow at Chouteau Cemetery. Friends may visit at the funeral home on Tuesday, March 3, from 2pm-8pm, with family receiving... View Obituary & Service Information

The family of Braxton Lee Landburg created this Life Tributes page to make it easy to share your memories.

Service for Braxton Lee Landburg will be 2:00p.m., Wednesday,...

Send flowers to the Landburg family.