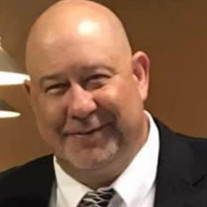 Bruce Frederick Budde passed away on August 10, 2021, at the age of 56 years old. He was born to Robert and Elaine Budde in Newton, Kansas on September 12, 1964. Growing up, he attended elementary school in Newton until his family moved to Claremore, Oklahoma in 1974. Brude attended and graduated from Claremore High School with the class of 1983. After high school, Bruce entered the workforce. He was a machinist for Gaffey Crane, Auto Crane, Howmet, and later Baker Hughes for 18 years. During his tenure at Baker Hughes, Bruce relocated to Scott, Louisiana, where he met the love of his life, Pam. Their first meeting was by chance when he saw a group of ladies having a Hurricane Katrina party. In typical Bruce fashion, he bought some food for grilling and crashed their party. Bruce and Pam became fast friends, and he eventually asked her out to a movie . . .and yes, of course, he cried during the movie. Bruce didn't mind shedding a tear at his favorite movies. Recently Bruce worked at Concrete Dispensary Systems. He loved his current position a great deal. Bruce had many hobbies throughout his life. He especially cherished family time. He enjoyed shooting guns of all kinds, playing catch, cheering on his son Kolby at baseball games, and family cruises. Bruce, otherwise known as "Budde Love", never met a hot tub he didn't like! Bruce was a faithful Christian man who loved to read and talk about the Bible to anyone he met. He was a graduate of Rhema Bible College. Bruce was a hard and diligent worker at whatever task he had in front of him with 100% effort. According to his family, he was famous for the world's best homemade chicken noodle soup. Those closest to him knew that the secret ingredient was his sweat. Bruce loved wisdom quotes from the Bible. One of his favorites was Provers 4:5-7, and he absolutely always ended his family prayers with the quote, "Can't we all just get along?!" He was preceded in death by his mother Elaine Budde and sister Candy Cummings. Bruce is survived by his father Robert Budde and wife Jean; his wife Pam Budde; children Ayrial Budde, Madison Huff and husband David, Kolby Budde, Dustin Lofton, and Jen Ipson; brothers Bryson Budde and wife Lisa and Brett Budde and Christie; brother-in-law John Cummings; grandcihldren Denise Budde, Malachi Williams, Urriah Williams, Ayriana Williams, Eliza Huff, and Lucas Lofton; his nephew and best friend B.J. Winton and wife Liz; niece Lindsay Gatrell and husband Gavin; and numerous other loving family members.

Bruce Frederick Budde passed away on August 10, 2021, at the age of 56 years old. He was born to Robert and Elaine Budde in Newton, Kansas on September 12, 1964. Growing up, he attended elementary school in Newton until his family moved... View Obituary & Service Information

The family of Bruce Fredrick Budde created this Life Tributes page to make it easy to share your memories.

Send flowers to the Budde family.