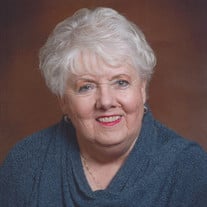 Carlene Katherine Webber was born March 27, 1936 in Charleston, Arkansas to Carl and Pauline Burkhard. She moved to Claremore during third grade and stayed to serve the city all her life. Her husband Robert (Bob) Webber; son Robert Webber, Jr.; and brother Charles Burkhard predeceased her. She is survived by her sister Carol Isaacs, daughter Lisa (David) Surritte, and son Mick Webber. She was the beloved grandmother of Matthew, Andrew, and Alex Webber; Kelli Surritte; Jennifer and Alexander MacKinnon; and great-grandchildren Soren and Eleanor. Carlene graduated from Claremore High School in 1954 and worked in the Tulsa area. As a young woman, she developed a passion for travel that spanned from short domestic bus rides to extended international trips. Carlene met Bob Webber when he returned from the Korean War, and the pair dated for three years before marrying at Christ the King Catholic Church on Patti Page in 1958. Working together, Bob and Carlene developed land and built homes around Claremore. As a young mother of Lisa, Rob, and Mick, Carlene eagerly took up duties as band, sports, and PTO mom Upon the death of her husband in 1988, Carlene sought meaningful work that would improve her community. She found strength in her many friends, some of whom encouraged her to run for office. She responded naturally to this calling and served as Claremore’s City Clerk for 14 years. After retiring from city hall in 2005, Carlene found renewed purpose in serving as Chairman of the Board for the Rogers State University Foundation and Dollars for Scholars program. She found immense satisfaction in creating community-wide benefits via the Foundation. Thus, she naturally excelled at fundraising and volunteering thanks to her passion for promoting all things Claremore. Carlene also took pride in being a “founding member” of several local clubs and traditions. Everyone knew Carlene Webber because she made a point to know and stay in contact with everyone. She cherished her duties for the Claremore High School class of 1954 and helped keep the class together by planning regular reunions. As her classmates quickly learned, Claremore homecoming ceremonies were not once-a-decade gatherings but a yearly imperative. Similarly important, her weekly (and often more frequently) game of bridge was nonnegotiable— rain or shine, sickness or health. Carlene was deeply committed to the Catholic faith and had a special place in her heart for St. Cecilia Catholic Church where she attended Mass, served as Eucharistic minister, participated in women’s groups, and sat on the building and finance committees. When Meals on Wheels started in the church kitchen, she cooked and delivered food around town– a job she was still performing in late 2021. Despite her many passions, careers, and duties, Carlene’s unquestionable greatest pride and joy was her beloved grandsons. Matthew, who made Carlene a grandmother, shares her birthday, which sparked a unique and deep relationship. She rarely missed an event involving her grandsons; from chaperoning “first dates” to basketball games, spelling bees, (unsanctioned) roadside lemonade stands, and everything in between. No matter what, the boys could count on “G” being there. Services for Carlene will be 11:00 a.m., Friday, November 19, at St. Cecilia Catholic Church, burial will follow at Woodlawn Cemetery. Friends may visit at MMS-Payne Funeral Home on Thursday, November 18, from 1pm -7pm. A rosary service will be held at 7pm on Thursday, November 18 at the funeral home. In lieu of flowers, please make contributions in Carlene’s name to St. Cecilia Catholic Church, 1304 North Dorothy Ave., Claremore, OK 74017or Claremore Meals on Wheels, 715 Mcclellan Ave., Claremore, OK 74017.

Carlene Katherine Webber was born March 27, 1936 in Charleston, Arkansas to Carl and Pauline Burkhard. She moved to Claremore during third grade and stayed to serve the city all her life. Her husband Robert (Bob) Webber; son Robert Webber, Jr.;... View Obituary & Service Information

The family of Carlene Webber created this Life Tributes page to make it easy to share your memories.

Send flowers to the Webber family.