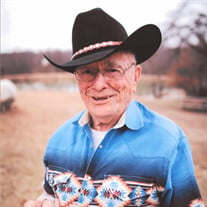 Carthel “K” Carmack, or CK as most called him, passed away September 27th, 2021 surrounded by family and friends in his home in Claremore Oklahoma. Viewing will be Thursday, October 7th 2:00 - 7:00 pm. Celebration of life to be Friday, October 8th at 10:00 am, both at MMS-Payne Funeral Home, 102 W 5th St, Claremore, OK. Interment will be in Floral Haven Cemetery, Broken Arrow Oklahoma. Carthel was born February 16th, 1929 in Olive Oklahoma. the son of James “K” Carmack and Alpha Ellen Cooper Carmack. CK attended grade school in Foyil, and Jr. High in Dawson Oklahoma. At age fourteen he started working as a caddy (couldn’t understand why you would chase a ball around), then worked at the Greyhound bus terminal servicing the busses. At sixteen he worked at Bordens milk, making ice cream. At seventeen, his mother signed the papers for him to enlist in the US Navy. During his enlistment he served in the Eastern Pacific on the destroyer USS Harwood, USS Jason, and USS Hamner. Carthel was honorably discharged in January 1948. While on leave in San Diego, he met Yvonne Bingley, the sister of a fellow shipmate. He was nineteen at the time and she was eighteen. They were married June 26, 1948, in Los Angeles California, then spent their honeymoon driving back to Oklahoma in a 1936 Chevy. In August of 1949 their first daughter Patricia (Patsy) Ann was born. The small family then went back to California where CK worked making baby furniture. In 1950 he got a call from a lifelong friend about a job in Tulsa with Public Service. In 1951 their second daughter Teresa Ann was born. After 36 years with PSO he retired in 1986. After several years in the Tulsa area, the Carmacks bought land in Chelsea, where he enjoyed raising cattle, dancing, and grandchildren. When Yvonne died in 1996 after forty-nine years of marriage, he increased his cattle herd and started custom hay bailing. In 2004 he married Margie Terry and moved to Claremore. They were married until her passing in 2019 after fifteen years together. He is survived by daughters Patricia Anderson and husband David, Teresa Baker and husband Jay; grandchildren: Jamie Starling, Ray Anderson, Eric Anderson, Chandra Thompson, and Beau Martin; great-grandchildren: Scott, Lane, Landen, Savannah, Aubrey, Zoey, and Everly; and great-great-granddaughter Audrey. We will miss him greatly, along with the waitresses at Eggbert’s.

The family of Carthel K. Carmack created this Life Tributes page to make it easy to share your memories.

Carthel “K” Carmack, or CK as most called him, passed away September...

Send flowers to the Carmack family.