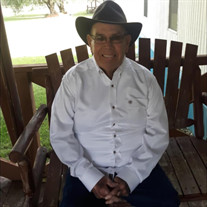 Memorial service for Charles McCamish will be held on Saturday, October 16, 2021 at Memorial Heights Baptist Church. Charles passed away on Tuesday, October 5th, 2021 at the age of 79. The son of E.J. and Irene (Kerr) Stewart was born October 4, 1942 in Claremore, Oklahoma. As a young boy he was raised in the Foyil area. There he would later attend Foyil school, where he enjoyed playing baseball. In 1966 he was drafted into the U.S. Army, and served in Vietnam. During his tour in Vietnam, Charles received the Purple Heart and Silver Star. Upon his discharge, Charles returned home to Oklahoma. One day while working in Tulsa, he would meet Doris Medlock. They would marry on March 27, 1969. He would make his home in the Harmony Star community just outside of Claremore. Over the next several years he would commute to Tulsa where he worked as a crane operator for the International Union of Operating Engineers local 627. He would work for them over the next 33 years, teaching apprentices for 30 of those years. He retired in 2000. In his spare time Charles had many hobbies and past times. He loved riding horses, fishing, and going to Branson. He made it a point to attend all family functions, because family was the most important thing in his life. Even when he probably should have stayed home because of health, he went to family gatherings. He is preceded in death by his parents E.J. and Irene Stewart, brother, Clyde McCamish; sister, Wanda Fenstermacher, and brothers-in-law, Will Morgan,and John Fenstermacher. Survivors include his wife, Doris McCamish; daughters, Sandra Emery and husband Bill, and Peggy McCamish; grandchildren, Billy Emery and wife Jasmine, Cody Emery and wife Tegan; Shylo Galvan and wife Racheal, Elena Galvan and Austin Galvan; great-grandchild, Bella Galvan; brother, Robert McCamish and wife Ahnawake, and sisters, Wilma Mallory and husband Ronnie, Ann Morgan, and Linda Portis and husband Bob. View and sign Charles' online memorial at www.mmsfuneralhomes.com.

Memorial service for Charles McCamish will be held on Saturday, October 16, 2021 at Memorial Heights Baptist Church. Charles passed away on Tuesday, October 5th, 2021 at the age of 79. The son of E.J. and Irene (Kerr) Stewart was born October... View Obituary & Service Information

The family of Charles McCamish created this Life Tributes page to make it easy to share your memories.

Memorial service for Charles McCamish will be held on Saturday,...

Send flowers to the McCamish family.