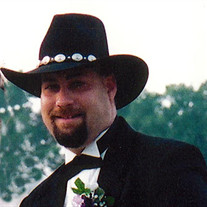 Funeral service for Christopher Lee Bryant will be held 2:00 p.m, Friday, March 1, 2019,  at the First Baptist Church of Inola, OK.  Burial will follow at Highland Cemetery. Visitation will be held on Thursday from 4-8 p.m. Christopher passed away on Sunday, February 24, 2019 at the age of 44. The son of Alan Bryant and Dana Liska was born December 31st, 1974 in Bentonville, Arkansas. As an infant Christopher's family moved to Inola, OK. There he would later begin attending Inola schools. Throughout his schooling, Christopher enjoyed participating in soccer, baseball, basketball, and football.  He was a member of the graduating class of 1993. In the years to follow Christopher continued working with his grandfather Leroy Bryant in his construction company. He later moved to Tulsa where he began working in the food service industry as a cook. A few years later Christopher met Jonna Summers, and they married on June 22, 2002. They made their home in Fayetteville, AR and it was during this time that he became active in animal rescue. He volunteered many hours at the Boxer Rescue of NW Arkansas. He enjoyed helping so much that they adopted their boxers Emmalee, Dudlee, and Haylee. He and his wife fostered many boxers and made a haunted house every year at Halloween, donating all proceeds to the organization. A couple of years ago, he moved to Maumelle, Arkansas to be near his mother. In his spare time Christopher enjoyed watching NASCAR, especially his favorite driver Dale Earnhardt Jr. He also enjoyed cooking with his mom, singing karaoke, hunting and fishing. However, his true love was spending time with his family and his boxers. He is preceded in death by his father, Alan Bryant and grandparents, June Bryant, and Goldie and Russell Arnold. Survivors include his mother, Dana Liska and husband Brian of Lonoke, AR; grandfather, Leroy Bryant of Inola; sisters, Janeill Long and husband Jerry of Lewisburg, WV, and Angel Peska and husband Brad of Cape Coral, FL; his nieces and nephews Robert Forester, Levi Long, Dylan Long, Jillian Peska, and Cara Peska, and numerous other extended family members.  Any donations made will be given to the Boxer Rescue of NW Arkansas in Christopher's name.

Funeral service for Christopher Lee Bryant will be held 2:00 p.m, Friday, March 1, 2019,  at the First Baptist Church of Inola, OK.  Burial will follow at Highland Cemetery. Visitation will be held on Thursday from 4-8 p.m. Christopher... View Obituary & Service Information

The family of Christopher Lee Bryant created this Life Tributes page to make it easy to share your memories.

Funeral service for Christopher Lee Bryant will be held 2:00...