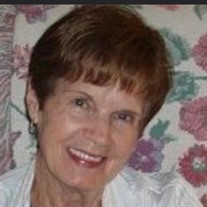 Clara Louise Rosencutter passed away on Friday, December 4th, 2020 at the age of 86. The daughter of Hawley and Lora Hogan Stanley was born November 20, 1934 in Tulsa, Oklahoma.  As a young girl she was raised in Tulsa, where she attended Jenks schools.  During her time at Jenks she enjoyed participating in FHA, and Choir, and was also named homecoming queen her sophomore year in 1951.  She was a member of the graduating class of 1953.  It was also while in school that she first met Bill Rosencutter, the two would begin dating and married on February 19th 1953.  The newly wed couple would live in Jenks for few years then moved to Tulsa for 5 years.  Then move back to Jenks until 1972 when they purchased a farm just east of Foyil.  In the late 1990's after several years on the farm Clara and Bill moved to their new home in Claremore. Clara was a person who had to stay busy her entire life.  This led her to a long working career.  She worked for Sears for over 16 years before retiring.  Once she moved to the farm, she began working at the Fashion Tree in Chelsea, Lucky's R.V. and eventually she and her daughter started Classy Curves in Claremore.   In her spare time Clara had many hobbies and past times.  She enjoyed playing Skipo, Phase 10 and Yahtzee.  On those rare occasions when she wanted to travel, Branson was a favorite destination.  However her true love was being with her family especially her grandchildren whom she loved baking their favorite dishes. She is preceded in death by her parents Hawley and Lora Stanley; husband Bill; brother, Tom Stanley and Sister, Rosa Alberty; Survivors include her daughter, Debra Bailey and husband Bob; grandchildren, Tana Ream and husband Mike, and Tara McMillan and husband Mac; great-grandchildren, Brayden, Tyler, Pierson, Trever, and Rhyan; great-great-grandchildren, Wesley, Jaxon, Creed and Tripp, and sister, Janice Wolf. View and sign Clara's online memorial at www.mmsfuneralhomes.com

Clara Louise Rosencutter passed away on Friday, December 4th, 2020 at the age of 86. The daughter of Hawley and Lora Hogan Stanley was born November 20, 1934 in Tulsa, Oklahoma.  As a young girl she was raised in Tulsa, where she attended Jenks... View Obituary & Service Information

The family of Clara Louise Rosencutter created this Life Tributes page to make it easy to share your memories.

Send flowers to the Rosencutter family.