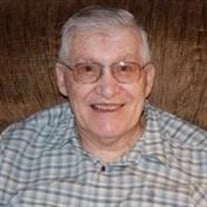 Funeral service for Clarence Franklin Green will be 10:00 a.m. Saturday, October 12, 2019 at First Baptist Church Inola. Burial will follow at Highland Cemetery. Friends may visit at the funeral home on Friday, October 11 from 1pm-7pm, with family receiving visitors from 5pm-7pm. Clarence passed away at his home on Thursday, October 10, 2019. He was 88 years old. Clarence was born February 25, 1931 in Inola, Oklahoma to Floyd and Ella Mae (Weast) Green. He attended schools in Inola, graduating with the class of 1949.  Clarence worked for a time, and then he joined the US Air Force and proudly served his country. On June 14, 1953, he married his high school sweetheart, Jane Lorene Spurlock. Clarence finished with his military duties and began college at OMA, and after two years he transferred to NSU at Tahlequah, graduating with a degree in Industrial Arts. Following his graduation, he began teaching in Ketchum, and during this time he took classes towards his Master's Degree. Clarence later took the Principal's job, and in the fall of 1971, he became Superintendent, a job which he held until 1984. After Ketchum, he worked in Delaware, retiring in 1985.    When Clarence retired, they moved to the family farm in Inola, and this was home until 2014, when Owasso became home. Not one to be idle, Clarence enjoyed many hobbies; gardening, leather work, bowling and building furniture, to name several. He also enjoyed traveling and following his favorite baseball team, the St. Louis Cardinals. Clarence most loved following his kids and later grandkids, and cheering them on in their sporting events. While they lived in Ketchum, Clarence was a deacon at the First Baptist Church.    Those family members that survive include his wife Jane Green; his children Tim Green and wife Trudy, and Beverly Green; his grandchildren Josh Green, Jaylie Manning, Matt Green, Joe Green, Bryan Lamb, Brandon Lamb, and Brittany Smith; and thirteen great-grandchildren. Clarence was preceded in death by his parents, his sister Alice Mullen, and son Randy Green.

Funeral service for Clarence Franklin Green will be 10:00 a.m. Saturday, October 12, 2019 at First Baptist Church Inola. Burial will follow at Highland Cemetery. Friends may visit at the funeral home on Friday, October 11 from 1pm-7pm, with... View Obituary & Service Information

The family of Clarence Franklin Green created this Life Tributes page to make it easy to share your memories.

Funeral service for Clarence Franklin Green will be 10:00 a.m....