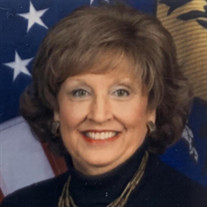 Claudia Jean “Jeannie” Cale, 65, passed away peacefully in her sleep surrounded by those she loved on July 19th after a two-year battle with cancer. She was born on July 24, 1954 to Don and Wilma Sullivan. She grew up in Sand Springs, OK and is a graduate and valedictorian of Charles Page High School Class of 1972. She moved to Tahlequah to attend Northeastern State University where she began her lifelong journey of teaching and where she met the love of her life, Larry. She graduated in 1976 with her Bachelor’s in Education and they got married shortly after and moved to Sand Springs before returning to Tahlequah where she and Larry pursued their Master’s Degree in Counseling. They then continued their careers in Inola and began their family. She raised two boys, Braden and Brant, and was present at every activity leading the cheering section. After a successful teaching and counseling career in Inola, Sand Springs and Claremore, she decided to change course and became the lead counselor at Thunderbird Youth Academy where she was able to combine her love of teaching and her innate ability to connect with and see the potential in young adults whose futures were unknown. She worked at Thunderbird from December 14, 2007 until her retirement on July 1, 2020. Jeannie’s interests and talents were many including being an avid reader and member of her long-time book club and counselor’s club, accomplished writer, connoisseur of good music, well-known history buff as well as a knack for design, with the uncanny ability to make any space look beautiful with a few simple touches. Perhaps her greatest of gifts was her ability to make each person worthy and deserving of love and you’d be hard-pressed to find anyone whose life wasn’t positively impacted by her sheer presence. Jeannie is proceeded in death by her father, Don Sullivan. She is survived by her mother, Wilma Sullivan, sister, Donna Sehon loving husband, Larry, two sons, Braden and Brant and surrogate daughter, Carla Martin, and 3 grandchildren, Jackson & Erica (Braden) and Myra (Brant) and countless other family and friends who knew and loved her dearly. In lieu of flowers please make a donation to the charity of your choice.

Claudia Jean &#8220;Jeannie&#8221; Cale, 65, passed away peacefully in her sleep surrounded by those she loved on July 19th after a two-year battle with cancer. She was born on July 24, 1954 to Don and Wilma Sullivan. She grew up in Sand... View Obituary & Service Information

The family of Claudia Jean Cale created this Life Tributes page to make it easy to share your memories.

Claudia Jean “Jeannie” Cale, 65, passed away peacefully in her...

Send flowers to the Cale family.