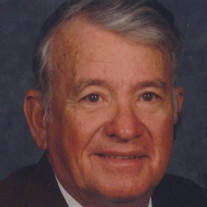 Services for Clay J. Mayes, Sr., will be at 2:00 p.m., Tuesday, September 15, 2020 at Washington Baptist Church. Burial will follow at Woodlawn Cemetery. Friends may visit at the MMS-Payne Funeral Home in Claremore, Oklahoma from 1:00 p.m. to 8:00 p.m. Monday, September 14, 2020 at the MMS-Payne Funeral Home, Family will greet friends from 6:00 - 8:00 p.m. Clay passed from his earthly life on Thursday, September 10, 2020, at the age of 90. Clay was born on September 28, 1929, in Miami, OK to Neal Mayes and Lillie Alice (Casey) Mayes. The family moved from Miami to the Claremore-Foyil area a few years later. Clay attended Washington elementary school which was a two-room schoolhouse. This was where he met Dodie Keys who became the love of his life. They were married on October 7, 1951. They remained in the Claremore area most of their 68 years together. Clay joined the service during World War II, but when it was discovered he was only 16 years old he was given an Honorable Discharge and asked to reenlist when he was old enough. He enlisted in the U.S. Air Force, serving from 1948 to 1954. During his tour of duty he served in Texas, Nevada and South Korea. He received the rank of Technical Sergeant, earning the Good Conduct medal, Korean Service medal, the A.V. Service medal and the National Defense Service medal. He was discharged at Forbes Air Force Base in Topeka, Kansas. Returning to this area, Clay found employment with Dowell in Tulsa for 21 years, retiring in 1980. Several years later he returned to Dowell as their Bulding Maintenance contractor for 4 years. Clay loved to fish and always had a good fish story. He also loved to mine for gold in Arizona. He brought home more rocks than gold. His grandkids sometimes called him the "Mad Scientist". He loved cutting wood and spending time outdoors. He also loved sitting in his porch swing at his country home, watching the cars go by. Clay is survived by his wife, Dodie, and their four children: Tonie Mallory and husband, Charles, of Chelsea; Clay Mayes, Jr. and wife, Nancy, of Owasso; Debbie Busch of Grapevine, TX; and Tammi Thomas of Claremore. Also 11 grandchildren, 21 great-grandchildren, two great-great granchildren, and his constant companion dog, Red. Clay was preceded in death by his parents, grandson Tony Lynn "Rawhide" Mallory, son-in-law Randy Thomas, brother Hank Mayes, and sisters Lucille Mayes Manor and Helen Kathryn Haynes. Services under the care of MMS-Payne Funeral Home & Cremation Service.

Services for Clay J. Mayes, Sr., will be at 2:00 p.m., Tuesday, September 15, 2020 at Washington Baptist Church. Burial will follow at Woodlawn Cemetery. Friends may visit at the MMS-Payne Funeral Home in Claremore, Oklahoma from 1:00 p.m. to... View Obituary & Service Information

The family of Clay J. Mayes Sr. created this Life Tributes page to make it easy to share your memories.

Send flowers to the Mayes family.