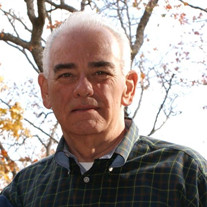 Clifton Leroy “Cliff” Carson, 73, passed peacefully from this world on the morning of December 10, 2019 at Saint Francis Hospital following a fierce five-year battle with stage IV kidney cancer. Cliff was welcomed into this world as the second of six children by Louella and Earl Carson on August 30, 1946 in Livermore, CA.  He graduated from Choctaw High School in 1965, and later received his Data Processing Certificate at Draughon’s School of Business in Oklahoma City.  He went to work for the First National Bank in Oklahoma City, and in 1974 became a Systems Analyst for the Bank of Oklahoma in Tulsa, retiring from the bank in 2004. On October 14, 1967, Cliff married the love of his life, Brenda “BJ” Murray, at the First Baptist Church of Choctaw, OK.  They soon became the proud parents of Bruce and Dionne “Dee” Carson. Their little family grew up together over the years and in 1974 moved to Tulsa and settled in Tiawah.  Over the next 18 years Cliff was his kids’ biggest sports fan – he never missed a game. A few years later they built their home in Inola, and as grandchildren came along his role of biggest fan expanded.  He loved nothing more than watching his grandchildren play basketball and baseball, but mostly his favorite sports of wrestling and golf.  He also enjoyed cycling, snow skiing, hunting, and wood-working.  Later in life after they both retired, he and BJ became avid bass fishermen. And, once again, Cliff found himself in the role of coach, mentor and biggest fan of his wife’s passion for fishing women’s bass tournaments. They traveled the southeastern part of the country for three years while BJ fished the Women’s Bassmaster Tour. He loved the friendship and fellowship he had with the other husband’s, who were affectionately known as “Bass Caddy’s”.  Cliff is survived by his wife of 52 years, Brenda “BJ” Carson; his children,  Bruce and wife, Renee Carson, Dee and husband, Jimmy Stookey; his five grandchildren, Montana Don Carson, Coby Ty Carson, Bryson Cal Carson, Laney Ann (Carson) Walker and husband Dillon, and Carson Matthew Stookey; his five great-grandchildren, David Lee Carson, Dannie Annabelle Walker, Dawn Evelyn Walker, namesake Callan Ty Clifton Carson, and Cutter Bruce Carson; his brother, Ron Carson and wife, Jenice of Ada, OK, and his sisters, Earlene Sutton of Rogers, AR, Wanda and husband Larry Hudson of Norman, OK, Sandy Carson of Ada, OK, and Robyn and husband Mike “Whitey” White of Eufaula, OK; and many nieces and nephews. A Celebration of Life Memorial Service will be held at 11:00 am, Saturday, December 21, 2019 at the First Baptist Church of Inola where Cliff was a long-standing member.  In lieu of flowers, the family requests that donations be made to the Kidney Cancer Research Alliance (KCCure) at www.kccure.org.

The family of Clifton Leroy Carson created this Life Tributes page to make it easy to share your memories.

Send flowers to the Carson family.