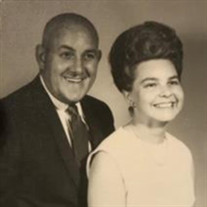 Clinton was born on September 4, 1925, at the family home on Catalaya street in Claremore, OK, to William Franklin Walton and Ruby Mae (Maxey) Walton. He grew up and attended school in Claremore, until the start of his senior year, when he was drafted and served in the US Army during WWII. His service prevented him from graduating, but he was honored as a Claremore High School Graduate class of 1944 in 2011. He re-enlisted in the Army as a Sergeant and served during the Korean conflict. Clinton met Sue Bushfield of Chelsea on a blind date. Their favorite pastime was roller skating. They could do all kinds of tricks and dances on their skates. They were married on November 6, 1948 at the United Methodist Church in Claremore, and remained marrield nearly 69 years, until they were parted by Sue's death. The couple made their home in Claremore. Clint specialized in welding and fabrication, working at UPCO Pipeline and Oil Equipment, Taylor Manufacturing, Jetco, Danuser, and Phillips Petroleum in South America. Clint was a member of First Christian Church of Claremore, and also of the Elks Lodge for 54 years. He loved roller skating with Sue. He also raced hydroplane boats at Claremore Lake, stock cars at the Tulsa Fairgrounds, and enjoyed golf and quail hunting. He had a soft spot for all animals. He also enjoyed watching Scott and Matt race cars and following the sports and activities of his grandchildren and great-grandchildren. Clint cherished his grandchildren and great-grandchildren; he loved to hold the young ones and sing "Deedle-um Deedle-um Deedle-um Dough". His greatest joy was his family, not only his son and daughter, but also his grandchildren and great-grandchildren. Clint was preceded in death by his parents William (Bill) Franklin Walton and Ruby Mae (Maxey) Walton; his wife Margaret Sue Walton; half-brother Kenneth Walton; and nephew Lowell Brooks. Survivors include children Debby Foster of Claremore and Scott Walton and wife Rose of Inola; grandchildren Bradley Foster and wife Laken of Macon, GA, Brent Foster and wife Jenni of Claremore, and Matt Walton and wife C'Ann, and Joe Walton and wife Shelby, all of Inola; great-grandchildren Amaeli Foster, Scotty Walton, Elizabeth Ann Walton, Collin Foster, Gloria Mae Walton, Brooks Walton, Winthrop Walton, and Dean Walton; sister-in-law Frankaleen Brooks and husband Larry of Celina, TX; nephew Steve Brooks and wife Sharon of Hideaway, TX, and the Carol Ann Brooks family of Allen, TX. View and sign Clinton's online memorial at www.mmsfuneralhomes.com.

Clinton was born on September 4, 1925, at the family home on Catalaya street in Claremore, OK, to William Franklin Walton and Ruby Mae (Maxey) Walton. He grew up and attended school in Claremore, until the start of his senior year, when he... View Obituary & Service Information

The family of Clinton C. Walton created this Life Tributes page to make it easy to share your memories.

Send flowers to the Walton family.