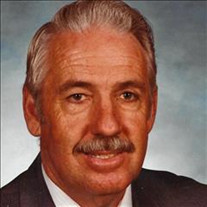 Funeral service for Chelsea resident, Clyde Branstetter will be 2:00 pm Friday, May 1, 2020, in the pasture at his home. Attendees are asked to remain in their vehicles. Friends may visit at Chelsea Funeral Home and Cremation Service on Thursday, April 30, from 5-7 pm. Clyde Earl Branstetter was born on April 9, 1930 in Hilltown, Oklahoma, to Clyde and Helon (Irvin) Branstetter. He graduated from Cameron High School in 1949. Clyde proudly served his country in the US Army from 1954 -1956. He attended Carl Albert Jr. College for two years, followed by Northeastern State University, where he received his Bachelor's degree. Following college, he signed on to teach at Alluwe School, before he had ever been there. That is where he remained for his entire teaching career. He taught school for 34 years, and drove the bus for 36 years, retiring in 1992. On January 17, 1959, Clyde married Shirley "Joanne" Leathers in Miami, Oklahoma. The two made the Chelsea area their home, and this is where they raised their family. When Clyde wasn't teaching or taking care of cows, he and Joanne enjoyed the country music shows in Branson. Clyde was preceded in death by parents Clyde and Helon Branstetter, wife Joanne Branstetter, son Doyle Branstetter, brother Myrl Branstetter, and sister-in-law Georgia Branstetter. He is survived by son Mike Branstetter and wife Lynda; grandchildren Alicia Robertson and husband John, Jerry Branstetter and wife Brooke, and Tyler Branstetter; great-grandchildren Grant Robertson, Amelia Robertson, and Lucy Branstetter; nephews Gary Branstetter, and Mark Branstetter and his wife Sandy; and nieces Pam Merchant and husband Bob, and Donna Hendricks and husband Bobby, as well as many great-nieces and -nephews, former students, and friends. In lieu of flowers, memorial donations may be made in Clyde's name to Chelsea FFA. View and sign Clyde's online memorial at www.mmsfuneralhomes.com.

Funeral service for Chelsea resident, Clyde Branstetter will be 2:00 pm Friday, May 1, 2020, in the pasture at his home. Attendees are asked to remain in their vehicles. Friends may visit at Chelsea Funeral Home and Cremation Service on Thursday,... View Obituary & Service Information

The family of Clyde Earl Branstetter created this Life Tributes page to make it easy to share your memories.

Send flowers to the Branstetter family.