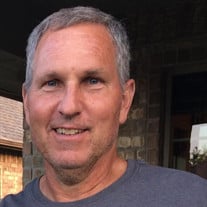 Dale Mark Janz passed away on Thursday, June 10, 2021 at his home in Inola. Dale was born February 1, 1963 in Pryor, Oklahoma to Joe and Dorothy (Penner) Janz. Dale accepted the Lord during church camp as a youth and baptized as a young teen. After Pastor John Voth came to Eden in 1990, Dale met with him to rededicate and commit his life to doing the Lord’s will. Dale spent a number of years with the youth of the church teaching Sunday School, Bible School and as a youth leader. Several youth have stories about Dale taking them hunting or fishing. Dale was raised in the country by a close-knit family who grew up attending Eden Mennonite church whenever the doors were open. The 5 siblings spent numerous hours in the yard playing games, including basketball and baseball. Dale was the 3rd boy to play baseball for his dad but his sport of choice would turn to football-the one his dad did not want! Dale’s high school team excelled with Dale being headlined in the paper as “Mr November”. His position was fullback. Dale graduated Inola High School class of 1981. During high school he met a girl from Tiawah named Angela Lamb. They were married in an outdoor ceremony in 1982 on a 103 degree day, and the love story began. Although Dale loved all the games and sports his siblings did, he had a passion for the woods and hunting. God lead him to a girl whose family has a love for hunting and camping and to a father-in-law with 4 girls (Steve). Steve taught Dale all the ways of the woods, as Dale passed his knowledge to his children, grandson and sons-in-law. Over the years, much enjoyment would be had in the Colorado Mountains and on Lamb Hill as Dale and Angela shared their love of the outdoors to all 5 of their children that blessed this union. The love of the outdoors carried over not only in hunting but camping, hiking, fishing and biking mountains and trails. Several memories were made on day and overnight hikes with the family. Hiking in Alaska was one such hike for Dale and Angela. The night was spent on the tundra without a care of bear or wolves-no tent nor sleeping bag. (Dale was not concerned, but Angela a little more so) Another adventure was a rafting trip in Alaska. The trip turned into a survival mission with a higher class of rapids than expected and an impromptu cold night spent on the river bank foraging for food as we had missed our place to get out. The next morning getting back in the raft after a very cold and wet night we paddled just around the river bend to find the motorhome looking for us. Dale attended Vo-Tech and was a machinist by trade. His last 32 years he was employed by American Airlines where he acquired a number of friends who he dearly loved. Dale was always known as a hard and diligent worker whether at work or home. Spending time working cattle was also a big part of Dale’s life as he and his brother David took over their father’s cattle operation. He was always quick to include the children and grandchildren teaching them at a very early age to drive the feed truck and how to pull a calf. He was a gentle God-fearing man who shared this with everyone he came in contact with but first and foremost his children. Several people have commented, as well as his wife, that he never lost patience or became angry. Grandchildren were Dale’s pride and joy with each one knowing they could get papa to do or take them anywhere, whether on a walk or for a push in the swings, no matter how well he felt. They in turn, took care of him too when he was bedridden and included him in their play. He served as a stand in father to Gage and Jada upon the loss of their father at an early age. Dale is survived by his wife Angela (Lamb) Janz, 5 children daughter Rachel Crane McDaniel and husband Jacob of Inola, son Hunter Janz and wife Amy (Mills) of Medicine Park, OK, son Jordan Janz and wife Lauren (Replogle) of Claremore, daughter Brielle Dorsey and husband Tyler of Inola, daughter Lorianne Peery and husband Nicholas of Inola. Grandchildren Gage and Jada Crane, Bauer McDaniel, Nolan and Dawson Dorsey, Julianne and Adalee Peery. Soon the baby girl Hallie McDaniel and baby Janz. Sister Rosalie and husband Scott Walton, brother Daniel Janz, brother David and wife Miharti Janz and sister Gloria Janz. Mother and father in law Steve and Georgia Lamb. Sisters brothers in law Stacey Krager, Tammy and Corry Mack, Darla and Keith McGowan. Several nieces and nephews. Dale is preceded in death by infant daughter Julianne Ruth Janz, his parents Joseph and Dorothy Janz, grandparents Jacob and Anita Penner, grandparents Philbena and Simon Janz. In lieu of flowers, donations can be sent to Eden Mennonite Church for various committees that have offered their love and support.

Dale Mark Janz passed away on Thursday, June 10, 2021 at his home in Inola. Dale was born February 1, 1963 in Pryor, Oklahoma to Joe and Dorothy (Penner) Janz. Dale accepted the Lord during church camp as a youth and baptized as a young teen.... View Obituary & Service Information

The family of Dale Mark Janz created this Life Tributes page to make it easy to share your memories.

Send flowers to the Janz family.