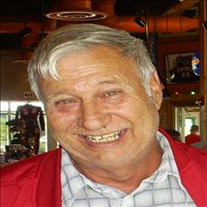 David Eugene Dormier entered the world on March 11th, 1948 in an Air Force Hospital around Fort Worth Texas, the middle son of John Carl and Ruby Doris Dormier. The family moved to the family farm in Megargel Texas while the boys were pre-schoolers. David started working on the farm as a pre-teen and when old enough joined the harvest caravan to the Dakotas each summer. The experience taught him hard work and how to fix equipment. His mechanical aptitude followed him through out his life as he kept family cars and appliances working long after they were deemed "toast." David met Carolyn Sue Hajovsky at a youth dance at the Knights of Columbus Hall in Scotland Texas, her hometown. A little over a year later on February 1st 1969 they were married at St. Boniface Church in Scotland and held the reception at the hall were they first met. The couple's first home was in Omaha Nebraska while David served the Air Force during the Vietnam War as a computer technician at SAC Headquartes Offutt Air Force Base. Shortly after their wedding the original KC Hall in Scotland was torn down and replaced with a new building, making theirs the last celebration in the century old building. While in Nebraska, Diane Louise Dormier and Paul David Dormier were born to the couple at the base hospital. The Dormiers returned to Texas when the service commitment was over. David resumed his college studies at the University of Texas at Arlington that were interrupted by his call to the Air Force. He had a renewed interest in computers and electronics and graduated from UTA with a BSEE. This degree landed him his first and only professional job at Century Geophysical in Tulsa Oklahoma. He worked at Century for over thirty-five years retiring at age 66 as Engineering Mananager, when his health took a turn for the worst. In Tulsa Kristina Marie and Phillip Michael joined the family. The couple's goal was to establish a home in the country and they purchased land in Inola Oklahome. For years they worked on preparing the land and started the building process, which became a family project. They moved to Inola in 1985 where they have resided since still working on projects around the house and acreage. David passed peacefully at the home July 20, 2020 with Carolyn at his side in the early evening. His five year battle with kidney failure and other health issues was over. He was 72, David was preceded in death by his parents, grand parents, many aunts and uncles, and a grandson Kerian David Cobbler. Survivors include his wife, Carolyn of the home, Diane Day and husband Dan of Stroud Oklahoma, Paul Dormier of Choctaw Oklahoma, Kristina Cobbler and husband Brian of Chouteau Oklahoma, Phillip Dormier and wife Haily of Inola, Brothers Johnnie August Dormier of Throckmorton Texas and Kennith Lee Dormier of Olney Texas, nine grandchildren and five great-grandchildren. His family was his life. Memorial Services will be held at Inola Funeral home, 310 North Broadway, Inola Oklahoma on Saturday, August 8th at 10 am. In lieu of flowers donations may be made to a Veteran's organization of your choice.

David Eugene Dormier entered the world on March 11th, 1948 in an Air Force Hospital around Fort Worth Texas, the middle son of John Carl and Ruby Doris Dormier. The family moved to the family farm in Megargel Texas while the boys were pre-schoolers.... View Obituary & Service Information

The family of David Eugene Dormier created this Life Tributes page to make it easy to share your memories.

Send flowers to the Dormier family.