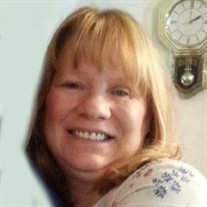 Service for Deborah "Debbie" Lynn Allison Stover will be 2:00 p.m., Tuesday, July 27, 2021 at First Christian Church of Chelsea, Debbie will be laid to rest at Dawes Cemetery in Chelsea. Visitation will be Monday, July 26 at the Chelsea Funeral Home from 1pm-8pm, with family receiving visitors from 6pm-8pm. Debbie passed away on July 23, 2021. She was 54. Debbie was born August 15, 1966 in Ft. Worth, Texas to Dwight and Dianna Allison. At the age of 2, Debbie moved to Oklahoma with her parents where she eventually welcomed her little sister Denise into the family. Debbie graduated from Chelsea High School in 1984. When she was 19 she was married and eventually welcomed her two sons, Scotty and Darren. For Debbie, motherhood came naturally, she handled it with grace and enjoyed every moment she spent with her kids. Inspired by her father's legacy of helping others, she dedicated her life to that cause. Debbie started by taking care of her grandmother, whom she affectionately named "Granny Allison". She then went on to start a career in healthcare by becoming a CNA/CMA and woking at various nursing homes and home health offices. It was at one of these nursing homes, where she worked alongside the man she would later marry. On August 3, 2012 Debbie married Wes Stover and the couple made their home in Alluwe, Oklahoma. Debbie spent her spare time loving on her family, especially her grandchildren, whom she adored. She enjoyed doing word searches and cooking for her family. She could always be counted on to make breakfast for her boys and taught them how to make biscuits and gravy from scratch. She was a great cook and made a fantastic peach cobbler, but may best be remembered for her jalapeno popper dip. Debbie was preceded in death by her grandparents, Earl and Edith Allison and Reger and Mildred Roach, her beloved father Dwight Allison and her mother-in-law, Carolyn Stover. Left to cherish her memory is her husband, Wes Stover; her sons Scotty Jones and fiance Tobi Bergmann and Darren Jones and wife Kaylin; her step-children Scott Stover and wife Tiffany, Courtney Stover, Brianna Marshall and Amber Marshall; her grandchildren Cassie Jones, Zaden Stanley, Zaylin Stanley, Zeryn Berry, Jackson Stover, Cooper Stover, Bentley Stover, Colter Bergmann, and Trayton Bergmann; her mother Dianna Allison; sister Denise Draeger and husband Quint; nieces and nephews Logan, Allison, Carson, and Jaclyn; her Texas family and numerous other family and friends.

Service for Deborah "Debbie" Lynn Allison Stover will be 2:00 p.m., Tuesday, July 27, 2021 at First Christian Church of Chelsea, Debbie will be laid to rest at Dawes Cemetery in Chelsea. Visitation will be Monday, July 26 at the Chelsea Funeral... View Obituary & Service Information

The family of Deborah Lynn Stover created this Life Tributes page to make it easy to share your memories.

Service for Deborah &quot;Debbie&quot; Lynn Allison Stover will be 2:00...

Send flowers to the Stover family.