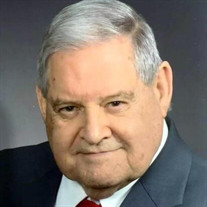 Don Taylor, 82, passed away on Friday evening, the 30th of July 2021, surrounded by family. Don was known by all for his sense of humor, his incredible stories, and his generous and loving spirit. Don’s greatest life passions were his long and varied career, his dedication to Jesus and the church, and most of all, his family. Donald Eldon Taylor was born in Claremore, Okla. on July 28, 1939 to parents Nancy “Nan” LaGretta (Akin) and Charles Percy “Buck” Taylor. Growing up, he attended school in Claremore, after which, he went to work as a patrolman for the Claremore Police Department. His career in law enforcement was briefly interrupted when he left to study at the Oklahoma Military Academy in Claremore and later, to Northeastern State University in Tahlequah. Eventually, Don began what would become his lifelong career path in city government, working as a city manager for numerous cities in Oklahoma and Texas, among these, Miami, Mangum, Stroud, Wharton, Tomball, Dickinson, Universal City, Aransas Pass, and Schertz, from where, he finally retired in 2012, working as the chief of police. Over the course of his life, Don belonged to several groups, such as the Masons, Rotary Club, Lions Club, Texas City Municipal League, and multiple police organizations. He was the recipient of awards too numerous to mention, culminating with him receiving the Lifetime Achievement Award from the Texas City Management Association in 2010. Upon retirement, Don and Shirley moved to East Texas, near their daughter, Kristi and her husband, Mark Don gave his heart to Jesus at a young age and was baptized as a child at First Baptist Church of Claremore at the same time as his mother and sister, Rita. Throughout his life, Don remained a man of faith – a faith which only deepened over the many years of his life. While going to the movies in 1965, Don saw his future wife, Shirley Breeden, whom he asked on a date the next day. The pair knew one another as both had grown up in Claremore. After a brief courtship, the pair were married at Trinity Baptist Church in Claremore on Jan. 28, 1966. One of Don’s greatest joys was the family that he and Shirley created with their daughters Debi, Lisa and Kristi, and their sons David and Don (II). He loved being with his children and grandchildren, attending events and celebrations, and was always wishing for more time together. Don was preceded in death by his parents, Buck and Nancy Taylor; infant daughter, Donna Elizabeth Taylor; son, David Wayne Corley; sisters, Elarie Cook, Rosalie (Billie) Turner, and Elva Lou Rongey; brothers, Charles Taylor and Gary Taylor, and granddaughter, Kristin Workman. He is survived by his wife of 55 years, Shirley Taylor; children, Debi Corley Workman and husband, Robert of Vinita, Lisa Taylor Fink and husband, Tom of Claremore, Okla., Don Taylor II and wife, Alex of Houston, Texas, and Kristi Hardy and husband, Mark of Spurger, Texas; sisters, Rita Taylor, Vivian Craighead, and Patricia Wallace; numerous nieces and nephews, grandchildren, great-grandchildren, and many other family members.

Don Taylor, 82, passed away on Friday evening, the 30th of July 2021, surrounded by family. Don was known by all for his sense of humor, his incredible stories, and his generous and loving spirit. Don&#8217;s greatest life passions were his... View Obituary & Service Information

The family of Don Taylor created this Life Tributes page to make it easy to share your memories.

Send flowers to the Taylor family.