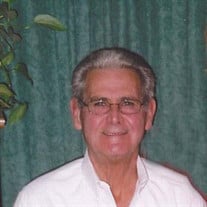 Memorial service for Don Bowman will be held 11:00 a.m. Thursday, July 9, 2020 at the Friendly Foyil Baptist Church. Donald Allen Bowman passed away on July 6, 2020 at the age of 74. The son of Cooper "Gerald" and Verda Hemphill Bowman was born February 27, 1946 in Chelsea, Oklahoma. As a young boy he attended the small country school of Whitehill, through the 8th grade. He then transfered to Chelsea Schools.  In his high school years he spent a semester in Miller South Dakota with his sister, Sue but returned to Chelsea where he graduated in 1964. After graduating Don moved to Ohio with his brother Roger. In 1965 he enlisted with the United States Army, he served until being discharged in 1967. Don then returned home to the Chelsea area. There he would meet and marry Saundra Moffett. To this marriage 3 boys were born. In the years to follow Don would work a few various jobs in the area. He worked at places such as Yuba Heat Transfer, Pixley Lumber and pipeline work out in western Oklahoma. Looking for a change Don left Oklahoma and headed to California. There he began working maintenance for local apartment complexes. It was also while working that he met Vernetta Barnish. They would begin dating and marry on November 26, 1990 in Miami, Oklahoma. A short time later Don and Vernetta would permanently move back to Oklahoma settling in the Chelsea area. For the next several years Don worked for a local rancher, Roger Morris, before taking a building maintenance job at the Rogers County Jail. He worked there until retiring in 2011. In his spare time Don enjoyed working on, painting, and restoring his old Ford trucks, especially the 1978 and 1979 models. Although if you asked him, he would probably say that restoring the 1940 Ford Coupe which was his first car purchased from his Daddy was his greatest project. Don loved his grandchildren and they made him light up. He enjoyed their stock shows, football games or whatever they were involved in. And whenever Grandpa showed up his famous no-bake cookies were expected. Don also had a quiet side, where he enjoyed focusing on his deep, quiet relationship that he had with the Lord. He is preceded in death by his parents Gerald and Verda Bowman and brothers, Gerald Wayne, Bill, Gary and Roger Bowman. Survivors include his wife Vernetta of the home; sons, Donald Bowman Jr. and wife Julie of Perkins, Greg Bowman and wife Lisa of Perkins, and Tony Bowman and wife Lee Ann of Glencoe; grandchildren, Cooper, Dalton, Wyatt, Hannah, Tyler, Rayanne, Ali, Cash, Kylie, Lila and Jesse; 4 great-grandchildren, and sisters, Anna Parks and husband Eugene, Sue Hardage and husband Dave, Trish Spangler, and Pam Rue along with many other extended family members. View and sign Don's online memorial at www.mmsfuneralhomes.com

Memorial service for Don Bowman will be held 11:00 a.m. Thursday, July 9, 2020 at the Friendly Foyil Baptist Church. Donald Allen Bowman passed away on July 6, 2020 at the age of 74. The son of Cooper "Gerald" and Verda Hemphill Bowman was... View Obituary & Service Information

The family of Donald Bowman created this Life Tributes page to make it easy to share your memories.

Send flowers to the Bowman family.