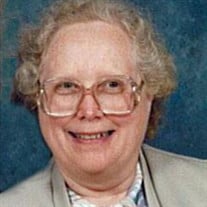 Service for Donna Jean Cooksey will be 10:00 a.m., Thursday, November 5, 2020 at MMS-Payne Funeral Home Chapel, burial will follow at Oakhaven Memorial Gardens. Friends may visit at the funeral home on Wednesday, November 4, from 1pm-8pm, with family receiving visitors from 6pm-8pm. Donna passed away on Saturday, October 31, 2020. She was 86. Donna Jean Cooksey was born March 6, 1934 in Atchison, Kansas to Theodore G. and Sarah E. (Sharpsteen) Conlin. She attended school at North High, in Wichita, Kansas. During her high school years Donna worked for Bucks Department Store as their elevator operator. Following her graduation, she began working for Boeing Aircraft, and it is here that she met Edgar R. Cooksey. The courtship lasted only 6 weeks, and the two were married on December 19, 1953. Home for the newlyweds became Wellington, Kansas, with most of Donna's family there, and the fact that the couple liked a smaller community. Three children blessed their union and Donna was the best mother and wife anyone could be blessed with. With Edgar's work at Boeing, the family lived for a time in Amarillo, Texas, and Roswell, New Mexico, then later Renton, Washington. In 1968 Oklahoma became home, first Collinsville and then Claremore,. This has been home since. Donna worked at Gateway Luggage for a time, and then at Heston Corporation. She always put her family first and made sure that their needs were met before anything else. Donna loved her family and enjoyed having them around. Her grandchildren often stayed the night, and there was much spoiling when they were around. Donna loved reading, and passed this down to her children. She also did needlework, and was a wonderful seamstress. When she lived in Wellington, Donna was involved with First Christian Church and helped with vacation Bible school. She was also the girls' Brownie leader for scouts. When she needed additional assistance, Donna made Brookdale her home, where she made new friends through the years. This devoted wife, mother, grandmother, and friend will be missed by all who knew her. Those family members that survive include her children Tony Ray Cooksey, Joyce Cooksey Washburn, and husband Bob, and Pamela Walker and husband Ronnie, all of Claremore; her grandchildren Chris Smith, Zack Washburn, Sarah Williams, Cassi Washburn, Courtney Blevins, and Elizabeth Cooksey; her great-grandchildren Chloe Washburn, Callen Williams, Noah McQueen, Harrison Blevins and Chapman Blevins. Donna was preceded in death by her parents, husband Edgar Cooksey, sisters Virginia Anderson, Theo Winters, and brother Samuel Conlin, and her great- grandson Silas Williams.

The family of Donna Jean Cooksey created this Life Tributes page to make it easy to share your memories.

Send flowers to the Cooksey family.