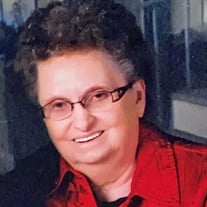 Services for Donna Faye Hubbard will be 2:00 p.m., Friday, April 2, 2021 at House of Prayer Holiness Church. Friends may visit at the funeral home on Thursday, April 1, from 1pm-8pm, with family receiving visitors from 6pm-8pm. Donna passed from this earth on the evening of March 27, 2021 at St. Johns Hospital in Tulsa. She was 82. Born March 7, 1939 in Collinsville, Oklahoma, her parents were William Clifford and Esther Lily (Stambaugh) Roof. The family lived in Collinsville until she was in the eighth grade, when they moved to Claremore. She was the youngest of six children, all girls. On July 14, 1956 at the age of seventeen, Donna Faye Roof married Richard Lee Hubbard. They rented a small apartment in Claremore and called it home. Richard Hubbard passed away on May 3, 2014. They were married for 57 years and had three children. In their earlier years, Richard and Donna moved often - living and ministering in several states including Oklahoma, Texas, Colorado, Arkansas, and Virginia. They pastors of many churches. Donna loved to visit and never met a stranger. She was a hard worker and would not sit still for long. Her occupations included babysitting, cleaning houses, cake decorating, floral arrangements, she sold family portraits and home interior decor. Her people skills eventually landed her a job selling real estate. She was a natural and in a few short years she was awarded the Top Real Estate Sales Agent in Rogers County. Donna and Richard later founded Hearth and Home Real Estate and Hubbardtown Real Estate. The also founded the House of Prayer Church located north of Claremore. Donna is survived by her daughter Donetta Broaddrick and husband Keith, sons Devon Hubbard and wife Margaret, and Denton Hubbard and wife Joetta; six grandchildren and five great-grandchildren. She was preceded in death by her parents and husband Richard.

Services for Donna Faye Hubbard will be 2:00 p.m., Friday, April 2, 2021 at House of Prayer Holiness Church. Friends may visit at the funeral home on Thursday, April 1, from 1pm-8pm, with family receiving visitors from 6pm-8pm. Donna passed... View Obituary & Service Information

The family of Donna Faye Hubbard created this Life Tributes page to make it easy to share your memories.

Send flowers to the Hubbard family.