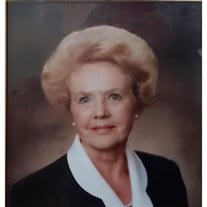 Donna Marie Casity (Mrs.Clem) McSpadden died Monday, Sept. 7, 2020, at her Chelsea home. Survivors are Noah, Chloe, Tucker and Luke, children of her son, Bart, who died in 2014, and their mother, Kate; sister, Norma Summy, and niece Telia Summy Lewis; Clem’s children, Paul and his sons, James and John, and Kay McSpadden Lucas; and extended family, the sons and grandchildren of Clem’s brother, Bob; and Leota McSpadden, widow of Clem’s brother, Trent, and his son and daughters and grandchildren. Born in Cleveland, the daughter of Edna Telia Fox and C.A. Casity, the family lived in several states while following her father’s work. They settled in White Oak when she was in the second grade and where she graduated. She started her career with in a Vinita attorney’s office, eventually leading to working at the Oklahoma State Capitol in the Court of Criminal Appeals and becoming Marshal of the Court. She continued her education at Claremore Junior College and the University of Tulsa while working as an administrative assistant for the Oklahoma Crime Commission. On Feb. 11, 1962, Donna and then Sen. McSpadden, were wed in White Oak and she began life of a family devoted to public service and the sport of rodeo – and a life on the McSpadden Ranch in Bushyhead. They later moved to a home in Chelsea, where she was involved in many aspects of small-town life. She was a member of Delphian Review Club and Bicentennial Chairman for the Chelsea Community. She was most proud of a survey and implementation of Rogers County’s first Head Start Program in Foyil Schools, where she was an administrative assistant. All the while, she was involved in the political and rodeo world of her husband, initiating Ladies Day at the National Finals Rodeo and a Western Art Show in conjunction with the World’s Richest Roping. She was involved in Democrat party politics on every level and was a delegate to the 1976 National Convention in New York City. In 1967, another major change was introduced into her life. Barton Casity McSpadden was born on Dec. 21. He attended Chelsea schools and his mother was immersed into school and Boy Scout activities and holding “open house” for Bart and his friends and family. When Clem, a former state lawmaker, decided to run for Congress, with Bart tagging along, Donna organized not only the “Clementines,” women traveling the district’s counties door-to-door to support the campaign and host social events, but “Clem’s Cowpokes,” to this day a closely-held group of young people helping in McSpadden campaigns. Cowboys and cowgirls, including Bart the youngest, dressed in cowboy wear, rode horseback in rodeos and parades. Under direction of Beverly and Bruce Hough, they also appeared at community gatherings. When Clem was elected to the U.S. House, the McSpaddens led an effort that took the Cowpokes and Clementines to Washington, D.C., for his inauguration. When space was not available for all to get into the Chambers for the oath-taking, the contingent was greeted and entertained by Mary Albert, in Speaker Carl Albert’s chambers outside the House — in an area now not usually opened to the public. As a legislative wife, Donna continued her involvement with constituents serving as a hostess for the White House First Lady’s luncheon and was member of the Congressional Wives Club. Clem often paid tribute to his family and their values and in an interview said “Donna is my No. 1 worker, supporter and truly the glue that holds this outfit together.” She was involved in McSpadden and Associates and shared a Chelsea office with Clem.

The family of Donna McSpadden created this Life Tributes page to make it easy to share your memories.

Send flowers to the McSpadden family.