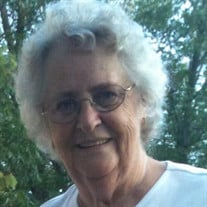 Funeral service for Dorothy Dewey will be held 2:00 p.m. Monday, December 9, 2019 at the Foyil Assembly of God Church. Pastor Jack Damico will officiate. Burial will follow at the Chelsea Cemetery under the direction of the Chelsea Funeral Home & Cremation Service. Dorothy Bell Dewey passed away on Wednesday, December 4th, 2019 at the age of 83. The daughter of Joe and Francis Ray Mouton was born September 11, 1936 in Claremore, Oklahoma. As a young girl she was raised in the Claremore area. She eventually began attending Claremore schools graduating as a member of the class of 1954. A short time later she met a Roy "Joe" Dewey, a young man helping his grandparents move to Chelsea. It was truly love at first sight. The two would marry on November 12, 1955 in Gilbert, Arizona. Over the next few years the couple made Gilbert their home. Then in 1962 Dorothy and her family moved to Chelsea, Oklahoma. Over the years Dorothy worked as a nurse. Once she was back in Chelsea she began working for Eastern State Hospital. She worked there from 1973 until her retirement in 1992. After retirement Dorothy and Joe began traveling. They spent the majority of there time between Oklahoma and New Mexico, visiting there family. However the were able to make it to Junction City, Texas camp meeting for seventeen straight years. In her spare time Dorothy had a few things she enjoyed. She loved being apart of her church, Foyil Assembly of God. She loved reading and crocheting. She actually crocheted so much that most people thought she could make an entire wardrobe in just a few hours. However everyone who knew Dorothy knew that the one thing she excelled at was talking on the phone. She is preceded in death by her parents, Joe and Francis; husband, Joe Dewey; daughter-in-law, Debbie Dewey, and siblings, Pat and Bill Mouton, and Joann and Shirley Froman. Survivors include her children, Tommie Dewey of Artesia, New Mexico, Deborah Broughton and husband Mike of Ceder Hill, Texas, Sandra Mizer and husband Randy of Chelsea, and Michael Dewey and wife Kassi of Keifer; grandchildren, Tammie Lard and husband Arthur, Teri Bratcher and husband Jamey, Roy Dewey and wife Billie, Kenneth Dewey and wife Samantha, Jenni Brigance and husband Larry, Stephanie Downing and husband Rick, Julie Vaquera, Brooke Broughton, Brodie Broughton Eric Mizer and wife Katy, Randa Wilkins and husband Weston and McKinzie Dewey and 19 great-grandchildren. View and sign Dorothy's online memorial at www.mmsfuneralhomes.com

Funeral service for Dorothy Dewey will be held 2:00 p.m. Monday, December 9, 2019 at the Foyil Assembly of God Church. Pastor Jack Damico will officiate. Burial will follow at the Chelsea Cemetery under the direction of the Chelsea Funeral... View Obituary & Service Information

The family of Dorothy Dewey created this Life Tributes page to make it easy to share your memories.

Funeral service for Dorothy Dewey will be held 2:00 p.m. Monday,...

Send flowers to the Dewey family.