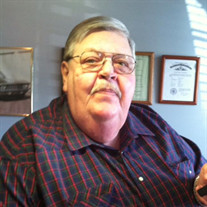 Douglas Eugene Gibson, husband, father, and PaPa, died peacefully, among family on May 25, 2021. He was 67 years old. Doug was born to Troyce and Nancy (Taylor) Gibson on May 25, 1954 in Coffeyville, Kansas, the third born of four children. Shortly after school age, the family relocated to Miami, Oklahoma. From then on, Miami, OK and Wichita, KS would hold many adventures for Doug. As a boy, he spent his days camping, exploring caves, and fishing. Like most young boys of the 60s, when forced, he attended school. However, for the Gibson kids, days spent adventuring on the Neosho River fitted them best. Eager to spread his wings and provide a living, as a teenager, Doug went to work in Houston, TX, driving a truck in the oil fields. He started his O.T.R truck driving career, which took him coast to coast, including Canada. Before the days of GPS or smart phones, you would call PaPa for any and all driving directions over the whole lower 48 states of America. In 1990 Doug met his forever love, a sweet little Chelsea lady who knew how to help him settle down a bit, Marilynn Jones-Wilson. On June 7, 1991, they were wed in Miami, OK. The story goes, Douglas invited Marilynn to go fishing, but instead he had planned for the catch of a lifetime— by eloping with his forever love. She said yes. Eager to settle down a bit and with health declining, he retired from truck driving in 1994 and started his own car business in Tulsa, Oklahoma called Dougies Buggies. The family later relocated to Chelsea in 2000, continuing the business. Doug was happiest when surrounded by his family and friends. Family bingo games were legendary when he was the caller. And when health permitted, he enjoyed grilling for family dinners and joy riding with Marilynn. Doug would talk cars with anyone who would listen and was a true entrepreneur at heart. Later in life, Doug’s relationship with the Lord grew stronger and stronger. One of the family's favorite memories will be him praying for their last Christmas dinner, in 2020. He was anxious to return and gather with church family after the pandemic, but sadly his health kept him away. He is survived by his wife, Marilynn of their home in Chelsea; son, Daniel (wife Kati) Gibson of Claremore, OK; daughter Jill Gibson of Wichita, KS; and nine grandchildren: Alli Beth, Jordyn, Ashley, Triston, Judah, Emmyn, and Ginni-Grace Gibson— all of Claremore, Oklahoma, Tyler Gibson of Chelsea, OK, and Sarah Gibson of Wichita, KS; three great-grandchildren, Jeremiah, Brooklyn and Titus; sister-in-law Twila Gibson of Oologah, OK; nephew Kenneth (wife Denise) Colvard, Jr, Joplin MO; and nieces Teresa (Robb) White, Miami, OK; Karrie (Michael) Jump, and Robin Gibson of Oologah, OK. Doug was preceded in death by his father, Troyce Gibson, mother Nancy Winton,step-father, Vernon Winton, sister Karen Colvard, and brothers Robert and Wesley Gibson. A Celebration of life will be held June 4th at 6:30 at the Sanctuary Fellowship Hall, 513 Pine Street, Chelsea. Family and friends are welcome, potluck dinner and stories await all. A special thanks to The Chelsea Fire Department for their many trips to aid Doug as his health declined. In lieu of flowers, the family would be honored by any donation made to The Chelsea Fire Department, attention Chief Craig Sampson. Their volunteer work is so valuable to our community, or to The Chelsea Sanctuary Building Fund: PO Box 88 Chelsea, OK 74016.

Douglas Eugene Gibson, husband, father, and PaPa, died peacefully, among family on May 25, 2021. He was 67 years old. Doug was born to Troyce and Nancy (Taylor) Gibson on May 25, 1954 in Coffeyville, Kansas, the third born of four children.... View Obituary & Service Information

The family of Douglas E Gibson created this Life Tributes page to make it easy to share your memories.

Send flowers to the Gibson family.