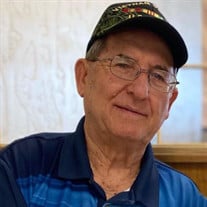 Funeral service for Earl Hamilton will be held 10:30 a.m. Monday, January 17, 2022 at the MMS-Payne Funeral Home Chapel. Burial will follow at Ft. Gibson National Cemetery. Pastor Ted Estes will officiate. Raymond Earl Hamilton passed away on Tuesday, January 11th, 2022 at the age of 76. The son of Raymond and Catherine (Anderson) Hamilton was born December 2nd, 1945 in Claremore. As a young boy he was raised mostly in rural Rogers County. He would attend Verdigris and Claremore schools before attending Foyil High School his senior year. There he would excel at baseball and basketball. He loved to share the story about hitting the winning shot in basketball and being carried off the court by his teammates. After graduating in 1963, Earl began his working career. However a few years later he was called to serve his country in Vietnam. It was during this time while on leave that he would marry his longtime girlfriend Cori Kittrell on Wednesday, March 31, 1966. A few days later Earl would be shipped out to Vietnam. After completing his tour there, he would become stationed in Hawaii. There Corie would join him until his enlistment time was over. They then returned home to Claremore. Earl then began working at Rockwell International. However his passion for wood working would lead him to a job building houses. It was during this time that he learned the skill of a trim carpenter. From that point on, Earl never looked back and was building cabinets until retiring at the age of 70. In his spare time Earl enjoyed many things. He loved traveling, especially the trip he and his family took out west. He worked crossword puzzles, and loved playing dominoes and golf. However spending time with his family is what he enjoyed the most. He is preceded in death by his parents, and brother, Bobby Hamilton. Survivors include his wife Corie; daughter, Sammi Jones and husband Tad; son, Jimmy Hamilton and wife Amy; grandchildren, Logan, Blake, Connor, and Pierce Jones, and Emma and Addison Hamilton; brothers, Jimmy Hamilton and wife Connie, and Johnny Hamilton, and sister, Cathy Bitting along with many other nieces, nephews and extended family. View and sign Earl's online memorial at www.mmsfuneralhomes.com

The family of Earl Hamilton created this Life Tributes page to make it easy to share your memories.

Send flowers to the Hamilton family.