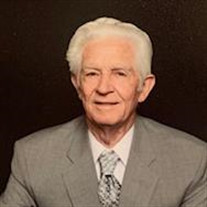 Service for Ed Meacham will be 2:00 p.m., Tuesday, December 14, 2021 at Redeemer Lutheran Church; burial will follow at Woodlawn Cemetery, under the direction of MMS-Payne Funeral Home. Friends may visit at the funeral home on Monday, December 13, 2021, from 1pm-8pm, with family receiving visitors from  6 pm-8 pm.  Ed Meacham passed away at his home on December 9th, 2021 at the age of 84. The son of Lawrence and Corrie Robbins Meacham was born October 23, 1937 in Muskogee, Oklahoma.  As a young boy, his family moved to the Adair area and began farming.  During this time, as many young kids did, Ed helped his family in the daily chores, all while attending the local Lutheran school.  A few years later, the family relocated just outside of Claremore in the Sageeyah community.  Ed would go on to attend Sageeyah and Claremore High School, finishing as a member of the class of 1958.  It was while attending Claremore schools that Ed met Kaye Denton.  The two began dating and married on April 4, 1959.   Soon after, the newlywed couple moved to Liberal, KS.  There, Ed would work for a local oil field supply company before opening his own full-service gas station.  Eventually, Ed and his family moved back to Claremore.  He began working for the local Goodyear tire store and worked as a service manager for many years. After it closed, he then began working for the City of Claremore, retiring from there in 2002. Ed, along with his wife Kaye, enjoyed many hobbies and pastimes.  They spent many hours together going to car shows and sharing their love of collecting classic cars. They were members of the Route 66 Cruisers and Tulsa Wheels car clubs. Ed enjoyed organizing the annual car show at Claremore Lake as well as the annual toy run benefitting the Shriner’s children's hospital. Ed and Kaye also traveled with the many friends they made from the car shows, and were able to see a lot of the country from Canada to New Mexico.   Ed also enjoyed dancing, gardening, fishing, and spending time at their lake house on Lake Hudson.  However, one of Ed's greatest pastimes was visiting. He cherished the friendships he had developed over the years with many close friends who have been there for him, especially after the loss of Kaye. He knew no strangers and loved to visit with everyone. He was like a real-life Andy Griffith.    Survivors include his children Vicky Miller (Robert), Connie McQueen (Leland), Trey Meacham (D’Laine), and Kelli Sellers (Justin); his grandchildren Kendra Sappington, Timmy Lunsford, James Lunsford, Blake McQueen, Steven McQueen, Alex Meacham, Abbey Meacham, Emerson Meacham, Avery Sellers, and Lauren Sellers; 9 great-grandchildren; and sister, Vivian Purvis.     Ed is preceded in death by his parents; wife, Kaye; daughter Lisa Dawn Meacham; and siblings, Mary Meyer, George Bales and Austin Bales.

Service for Ed Meacham will be 2:00 p.m., Tuesday, December 14, 2021 at Redeemer Lutheran Church; burial will follow at Woodlawn Cemetery, under the direction of MMS-Payne Funeral Home. Friends may visit at the funeral home on Monday, December... View Obituary & Service Information

The family of Ed Meacham created this Life Tributes page to make it easy to share your memories.

Send flowers to the Meacham family.