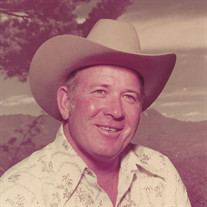 Funeral service for Edward Wofford, III will be held 1:00 p.m., Monday, November 25, 2019 at the Oologah United Methodist Church. Burial will follow at Fairview cemetery in Talala, under the direction of MMS-Payne Funeral Home and Cremation Service. Edward Lee Wofford, III passed away on November 22, 2019, at the Claremore Veterans Center at the age of 84. The son of Edward and Elsie Snook Wofford was born May 21, 1935 in Oologah, Oklahoma. As a young boy he was raised there on his family's farm. He would eventually attend Oologah schools, graduating with the class of 1953. After graduating Edward joined the United States Army. While on leave, Edward returned home to Oologah and married Dorothy Green on April 9, 1955. The newlywed couple moved to Georgia, where Ed was stationed. On January 23, 1957, Ed was discharged, and he and his family quickly returned home to Oologah. Over the next several years Ed worked in the construction industry. He helped build many miles of area highways, and even helped build the Oologah dam. Eventually he landed a job working for Peabody Coal. He worked there around 20 years before retiring in the early 1990's. Ed was proud of his Oologah heritage. He even served as mayor for a short time. A favorite quote of Ed's was "Claremore stole Will Rogers, but they will never get Edward Wofford". In his spare time Ed had many hobbies and pastimes. When he was younger he loved to rodeo. Later he enjoyed hanging out with his family and friends in the game room of his home. There have been many long nights spent there listening to the juke box, dancing, and playing pool. He also enjoyed the many days riding his horse on the farm, checking and working his cattle. He is preceded in death by his parents. Survivors include his wife of 64 years, Dorothy Wofford; children, Sheila Wofford, Edward Wofford, IV and wife Debbie, and Julie Black and husband Rick; grandchildren, Heather Edwards, Ed Wofford, V, Melinda Grantham, Weston Wofford, Bailey Black, and Drake Black; great-grandchildren, David, Noah and Elizabeth; brother, Don Wofford and wife Beverley; and numerous other extended family. View and sign Ed's online memorial at www.mmsfuneralhomes.com.

Funeral service for Edward Wofford, III will be held 1:00 p.m., Monday, November 25, 2019 at the Oologah United Methodist Church. Burial will follow at Fairview cemetery in Talala, under the direction of MMS-Payne Funeral Home and Cremation... View Obituary & Service Information

The family of Edward Lee Wofford III created this Life Tributes page to make it easy to share your memories.

Send flowers to the Wofford family.