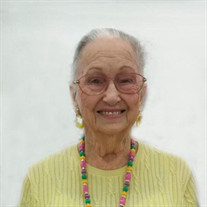 Elizabeth "Betty" Luella (Gordon) Johnson was born April 14, 1925 to Earl & Marguerite E. (Neuerburg) Gordon. She died June 15, 2021, at the age of 96. She was born in Perry, Oklahoma, where she grew up. At the end of WWII, she met and married Blake E. Johnson on Christmas Eve, 1945. They were married 63 years. They lived in Perry, then Phoenix for a short time, then Stillwater, before establishing their home in Edmond, where Blake worked and retired from Tinker Field AFB. She worked as a "pioneer" telephone operator, then business representative, until she retired from Southwestern Bell in l975 after 30 years. They then set up their retirement/vacation home on a mountaintop in Alpine, Arkansas, where she loved to fish & hunt. Upon the death of her husband, she moved to Inola in 2009. She became active in the Inola Senior Center, where she loved to play bingo and bunco with all her dear friends. Elizabeth was preceded in death by her parents, two brothers: Robert Gordon & Harry Gordon, husband, two sons: Blake E. Johnson, Jr., and Cpl. James E. Johnson. Elizabeth is a Gold Star Mother. She is survived by her sister, Ilene Wilde, of Yukon; two daughters - Delia Patterson of Edmond, and Claudia Plett of Inola; three Grandsons - Chett Payne, Michael Payne, & Brent Patterson; one granddaughter - Shawna Patterson; one Step-Grandson - James Patrick Plett; eight Great- Grandchildren - Blake Payne, Austin Payne, Devon Payne, Kenneth Payne, Sharon Payne, Megan Sites, Gwen Patterson, and Whitney Patterson; and three Nephews - Vernon Wilde, Wayne Wilde, and Mickey Gordon. Memorial donations may be made to the Crone's & Colitis Research Foundation. View and sign Elizabeth's online memorial at www.mmsfuneral homes.com.

The family of Elizabeth Luella Johnson created this Life Tributes page to make it easy to share your memories.

Send flowers to the Johnson family.