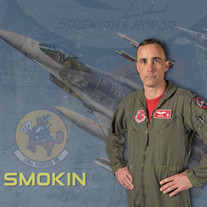 Lt. Col. Eric Matthew Jauquet, loyal husband to Melissa, devoted father of Reagan and loving son of Rebecca and David, passed away on Saturday, March 20 from sudden cardiac arrest at the age of 48. Eric was born on October 31, 1972 at Grand Forks Air Force Base, North Dakota. The proud son of an Air Force pilot, Eric grew up in Texas, Iowa and Idaho, where his family was posted. He attended East High School in Sioux City, where he wrestled (reaching the Iowa state championships) and played football. Eric attended the University of Tulsa, where he was the president of Pi Kappa Alpha fraternity, graduating with a degree in Mechanical Engineering. Following in his father’s footsteps, Eric became a member of the 138th Fighter Wing of the Oklahoma Air National Guard in 1994, serving continuously for more than 26 years until his death. Eric graduated pilot training from Laughlin Air Force Base in June of 2000 and was an F-16 pilot in the 125 Fighter Squadron for more than 20 years, serving as Fighter Pilot, Training Officer, and Chief of Safety, among other assignments, before being promoted to Commander of the 138th Operational Support Squadron. Eric, or “Smokin,” as his squadron-mates refer to him, accumulated nearly 3,000 hours of fighter time in the F-16, including 125 combat missions in support of Operation Southern Watch, Operation Northern Watch, Operation Iraqi Freedom, Operation New Dawn, Operation Enduring Freedom, Operation Freedom’s Sentinel and Operation Inherent Resolve. He received 22 separate commendations, including the Meritorious Service Medal, the Air Medal, the Aerial Achievement Medal, and the Air Force Commendation Medal. He took great pride and joy in training and mentoring young pilots, hosting children battling serious illness at the Base, and performing flyovers, among many other acts of service. Eric was planning to retire from the Air National Guard on July 1, 2021. Eric’s military service was driven by deep patriotism and duty to his country, as well as a powerful bond to his brothers in arms. Eric also served as a First Officer for American Airlines, which he proudly referred to as “the world’s largest and greatest,” after being hired on the 4th of July, 2014. Eric adored his family, coaching Reagan’s soccer team when she was young; proudly following her many scholastic achievements and her cheer career; traveling with Melissa, Reagan and their extended family; and lovingly tolerating his many boisterous in-laws. He took great pride in creating a beautiful home and backyard for his family, spending countless hours on his riding lawn mower. On the weekends, Eric loved to be on his boat with Melissa and Reagan and their close community of friends at Grand Lake, where he excelled at manning the grill. Taking care of his wife and daughter was Eric’s greatest duty, and he did that heroically. Eric graced his family, friends, colleagues and everyone who knew him with dignity, kindness and class. He was lost far too soon and will be dearly missed forever. Eric is survived by his devoted wife Melissa, his daughter and greatest joy Reagan Elizabeth, his parents Rebecca and David Jauquet, his sister Jennifer McQuet, and his mother-in-law Sandra Walker, as well as an adoring and admiring extended family. Eric was a passionate supporter of Shriners Hospitals for Children and St. Jude Children’s Research Hospital. If you would like to make a donation in his memory, please consider https://donate.lovetotherescue.org or https://donate.lovetotherescue.org.

Lt. Col. Eric Matthew Jauquet, loyal husband to Melissa, devoted father of Reagan and loving son of Rebecca and David, passed away on Saturday, March 20 from sudden cardiac arrest at the age of 48. Eric was born on October 31, 1972 at Grand... View Obituary & Service Information

The family of Eric Matthew Jauquet created this Life Tributes page to make it easy to share your memories.

Send flowers to the Jauquet family.