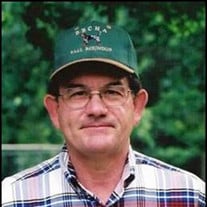 On Saturday, September 19, 2020, Everette Hagebusch was called home to the Lord at the age of 69. The world lost a great maker, builder, husband, father, grandfather, brother, and friend. Everette was loyal and generous to all who knew him. He was eager to lend a hand to anyone in need of help. He was a great provider for his family and set an incredible example of love and kindness for his children and grandkids. Frederick Everette Hagebusch was born in Nowata, OK on October 13, 1950. He was the oldest of three siblings and enjoyed pestering and pranking his younger sisters. He attended Alluwe Public Schools, where he graduated in 1968. He attended NEO A&M in Miami, OK and then received his degree in education from Northeastern State University in Tahlequah. He married the love of his life, Trish, on August 1, 1973. Together they raised a great family and built a life of love and friendship that will last an eternity. Everette taught woodshop and drafting at Chelsea High School and drove a bus route for many years. Even after he left education, Chelsea Schools and the community were always important to him. He served almost 25 years on the Chelsea Board of Education. The teachers and students were always his main priorities when serving on the board. After teaching, Everette joined the trades and was a proud member of the Sheet Metal Workers Local Union #270 in Tulsa where he retired in 2012 after 34 years. Any trip through the Tulsa metro area always brought stories of buildings he had worked on and the many friendships he made on jobsites across the country. Everette had many interests throughout the years. He was an avid coon hunter and member of the Bluetick Breeders & Coon Hunting Association. He made many friendships and had a million stories of following dogs through the woods with some of his lifelong best friends. He was extremely active in Chelsea Little League Baseball and Softball back in the day. He coached a little league team for many years and helped build the little league fields that are still used today. Everette also loved the local FFA & 4-H chapters. He was integral in the building of the show barn and was an active supporter of the chapter. Long after his own kids had graduated, he still raised show hogs and helped students in need to acquire quality show animals. His title of “Pappy” was what he was most proud of. He thought the world of his grandkids and cherished every moment with them. He loved watching their ball games, teaching them about coon hunting and fishing, and even had them working in his garden. He loved the fall break camping trip and looked forward to it each year. After retirement, he developed a passion for beekeeping. He had numerous hives and enjoyed harvesting “Pappy’s Backyard Honey” to share with his family and friends. The biggest legacy Everette leaves behind is his family and friends. His favorite times were always when people were gathered together for any kind of event. He could talk to anyone about anything and was always quick with a joke or a hug. You could usually find him in the middle of a crowd telling one of his many stories that he always had ready. He enjoyed camp style cooking and had become known for his Dutch-oven potatoes and pineapple upside down cake. He was always there any time anyone needed a helping hand. Everette was a jack-of-all trades and if you knew him, chances are his fingerprints are on a project he helped you with. Everette is preceded in death by his parents Frederick and Betty Hagebusch and his siter Sandy Hagebusch. He is survived by his wife Trish Hagebusch of Chelsea; daughter Amy Rice and husband Morgan and their child Levi of Chelsea; son Matt Hagebusch and wife Marilee and children Nick and Ben of Claremore; sister, Brenda Hagebusch of Alluwe; and numerous other family and friends. In lieu of flowers, memorial donations may be made to Stephenson Cancer Center at the University of Oklahoma Foundation, PO Box 258856, Oklahoma City, OK 73125-8856.

On Saturday, September 19, 2020, Everette Hagebusch was called home to the Lord at the age of 69. The world lost a great maker, builder, husband, father, grandfather, brother, and friend. Everette was loyal and generous to all who knew him.... View Obituary & Service Information

The family of Everette Hagebusch created this Life Tributes page to make it easy to share your memories.

Send flowers to the Hagebusch family.