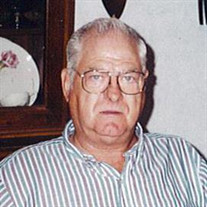 Services for Frank Eugene Ward will be 10:00 a.m., Friday, April 26, 2019 at MMS-Payne Funeral Home Chapel. Friends may visit at the funeral home on Thursday, April 25 from 1pm-8pm, family will receive visitors from 6pm-8pm. Frank passed away on Sunday, April 21, 2019. He was 78. Frank Eugene Ward made his entrance as the second son into the family life of proud parents Millard Albert and Mary Eva Ward. This momentous event took place on a hot day, August 4, 1940 on the old McSpadden place near Chelsea. Those dear parents and his older brother Charles Roy Ward, have preceded him in death. Frank grew up on a family farm northwest of Foyil, engaging very early, at the age of 6, in the daily driving of milk cows down the dirt road, what is now called Spencer Creek Road, for 1-1/2 miles to the milk barn, not to mention the countless other chores that expanded as he matured. Frank graduated from Foyil High School in 1960 and married Daisy Keys from the Washington community not far away. Together they welcomed their three children. Frank trusted in Jesus and affirmed the tenants of Christian truth, joining Daisy to nurture their offspring in integrity. Hobbies included light farming and ranching, coin collecting, something he did many years, later he collected novelty salt and pepper shakers, a hobby he enjoyed with grandson Joshua. During his earlier years his family knew him as one of the hardest working men around. This legacy of work ethic he sought to instill in his progeny, always with jobs around the house and a small farm, "if we are not building, we are repairing". The family continues to enjoy and productively utilize the infrastructure he developed as he farmed. Frank enjoyed several lines of employment ranging from steel fabrication shop, concrete finishing, and he especially enjoyed his involvement of producing components for the space shuttle and international space station during his 35-year employment with Rockwell International/Boeing. He leaves behind to cherish his memory, wife Daisy, son Terrry and wife Karen Michele Ward, daughter Sherry Ward, and son Todd Ward all of Foyil; grandchildren Ezekiel Ward, Joshua Ward, Lydia Ward, Hannah Ward; sister-in-law Melva Ward; 8 nieces and 2 nephews. The family wishes to thank the caring group of Good Shepherd Hospice for their help over the last 9 months of Frank's care. Memorials may be made in Frank's name to Good Shepherd Hospice at 4343 S. 118th E. Ave. Suite 160, Tulsa, OK 74146 View and sign Frank's online tribute at www.mmsfuneralhomes.com

The family of Frank E. Ward created this Life Tributes page to make it easy to share your memories.

Send flowers to the Ward family.