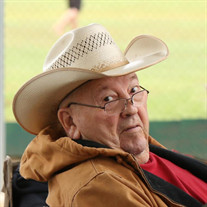 Graveside services for Gary Draeger will be held 2:00 p.m Wednesday, April 8, 2020 at the Dawes Cemetery. The service will be available on Facebook Live through MMS-Payne Funeral Service Facebook page. Visitation will be held on Tuesday, April 7, 2020 from 5-8 p.m. Gary passed away on April 2, 2020 at the age of 72. Gary, the son of Roy and Wynona Grigg Draeger was born February 27, 1948 in Chelsea, Oklahoma. He was raised in Chelsea and attended Chelsea Public Schools from kindergarten until he graduated as a member of the Class of 1966. As a child, Gary loved baseball and riding horses. He was a Member of the Dragon football team throughout his high school career. Wanting to continue his education, Gary began attending Oklahoma Military Academy for his freshman year then transferred to Northeastern State University. Gary met the love of his life, Roberta Axley during his junior year while attending Chelsea High School. The high school sweethearts were married on July 26, 1968 in Chelsea at the Memorial Methodist Church. The newly wed couple made their home in Tahlequah for one year, then returned to Chelsea. Gary then attended Pipefitting classes, after completing and obtaining his pipe fitting certification, he took a job working for Pipe Fitters Local 205. Over the next several years, Gary would work all over northeastern Oklahoma, across the US as well as working internationally. Eventually, he took a job working for Rogers County and later with Public Service Company of Oklahoma. Gary had many hobbies, some of his favorite pastimes were coaching his son and daughter on their little league baseball and softball teams. He enjoyed fishing, bird hunting and reading western novels, specifically any novel written by Louis Lamour. Throughout his life he always had the desire to be a cowboy. He began participating in events such as steer roping and team roping. He took pride in helping the beginners, believing that everyone needed a helping hand. In the past several years you could find him down at the Jiffy Mart drinking coffee with his proclaimed social club. After retiring from roping most of his time revolved around his grandchildren, Logan, Allison, Carson, and Jaclyn. He enjoyed watching them play sports and any other event where they participated. Gary was also a long time member of the First Baptist Church of Chelsea. He is preceded in death by his father, Roy Draeger, and grandson, Joshua Bear Smith. Survivors include his wife, Roberta Draeger; children, Quint Draeger and wife Denise, and Jennifer Smith and husband Jack; granchildren, Logan, Allison, Carson and Jaclyn Draeger, his mother, Wynona Draeger, and sister Ruetta Paris. View and sign Gary's online memorial at www.mmsfuneralhoms.com

Graveside services for Gary Draeger will be held 2:00 p.m Wednesday, April 8, 2020 at the Dawes Cemetery. The service will be available on Facebook Live through MMS-Payne Funeral Service Facebook page. Visitation will be held on Tuesday, April... View Obituary & Service Information

The family of Gary Draeger created this Life Tributes page to make it easy to share your memories.

Graveside services for Gary Draeger will be held 2:00 p.m Wednesday,...

Send flowers to the Draeger family.