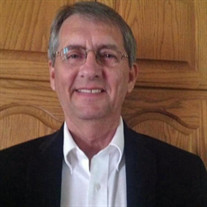 Services for Gary Steven Stinnett will be held 11:00 a.m. Tuesday, March 30th, 2021 at First Christian Church in Chelsea. Burial will follow at Chelsea Cemetery under the direction of Chelsea Funeral Home and Cremation Service. Visitation will be 2-7 p.m, Monday, March 29, at the funeral home. Family will greet friends from 5-7 p.m. Gary died Thursday, March 25, 2021 at his home in Claremore. He was 69 years old. The son of Jack Stinnett, Sr. and Joann (Olsen) Stinnett was born November 28, 1951. Gary grew up in Chelsea, where he attended Chelsea High School. He was quite the athlete, lettering in basketball, football, and baseball. After high school, he attended NEO in Miami, OK, on a basketball scholarship, but had to give up his basketball career due to a back injury. He was a member of the Boilermakers Local 592, where he became a master welder. He went on to work for Nordam as a master welder, from which he retired in 2009. He enjoyed all types of sports, especially anything OU. He enjoyed gardening every year. Gary loved hanging out with his granddaughters, watching them play sports, and taking them on summer vacations. He loved spending time with his family and friends and studying the word of God. Gary was preceded in death by his infant son Jimmy Kimble Stinnett, father Jack Stinnett, Sr., and brother Jack Stinnett, Jr. He was survived by his wife of 38 years, Trixie Stinnett of the home, mother Joann Stinnett and Jim Robb of Alluwe, son Matt Stinnett and wife Misty and granddaughter Rachel, all of Chelsea, son Jeff Stinnett and wife Julayne and granddaughters Kayelyn and JoJo of Claremore, and grandson Jeremy Bryant and wife Jamie, and Teagan and Aislynn, all of Chelsea. Also numerous nieces and nephews, and sister- and brothers-in-law. In Lieu of flowers the family requests a donations be made to The American Heart Association at www.heart.org

The family of Gary Steven Stinnett created this Life Tributes page to make it easy to share your memories.

Send flowers to the Stinnett family.