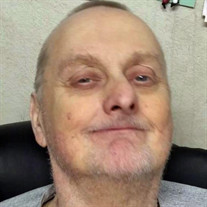 Gary Lee Stonebarger February 11, 1951 ~ January 30, 2021 Gary Lee Stonebarger, 69, of Claremore, Oklahoma, departed this earth on January 30, 2021, in Tulsa, Oklahoma. He was born in Muskogee, Oklahoma, to Betty (Fuller) Stonebarger and Jess Stonebarger. Gary graduated from Inola High School in 1968. He attended Oklahoma Military Academy, and left to join the Army. He served from 1969 to 1975, serving in the VietNam War for one year. He earned the National Defense Service Medal, two overseas bars, VietNam service Medal, Sharpshooter, Vietnam Campaign Medal, and Expert M-16 Rifle. After leaving the Army, he married Sharon Adkison on March 24, 1979, in Bellevue, Nebraska. They had three children, then relocated back to Oklahoma. Gary attended Rogers State College, earning a degree in Computer Science. He worked for Boilermakers Local 83 from 1975 to 2009, and traveled the country, working until retiring in 2009 to spend time with his family. He enjoyed riding his Harley, and collecting coins and Made in America items. He also volunteered at the local DAV to help fellow veterans. Gary was preceded in death by his parents and his dog Tippy. He is survived by his wife Sharon of the home, two daughters, Sabrina Simmons and Amanda Stonebarger, son Timothy Stonebarger, two brothers, Larry and Trudy Stonebarger and William and Teri Stonebarger, all of Claremore, three grandsons, Anthony Fryar, Issaih Stonebarger, and Exodus Simmons, three granddaughters, Lorali McIntosh, Amarionda Douglas, and Rowan Stonebarger, and many neices and nephews. Gary will be laid to rest at Ft. Gibson National Cemetery in Ft. Gibson, Oklahoma, at a later date.

The family of Gary Lee Stonebarger created this Life Tributes page to make it easy to share your memories.

Send flowers to the Stonebarger family.