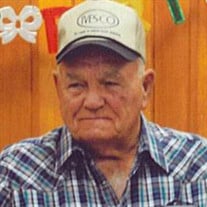 Graveside services for Gene Stout will be held 11:00 a.m. Friday, February 5, 2021 at the Stout Family Cemetery. Visitation will be held on Thursday, February 4, 2021 at the Eden Mennonite Church from 3-8 p.m. with family greeting friends from 6-8 p.m. Please wear your mask to visitation and to the graveside service please. Gene Franklin Stout passed away on Saturday, January 30th, 2021 at the age of 91. The son of Herbert and Ruby Marsh Stout was born on June 20th, 1929 in Tulsa, Oklahoma. As a young boy he was raised east of Claremore in rural Rogers County. At the age of 9 Gene's family moved to what is now the Stout family ranch in Inola. In the years to follow Gene worked side by side with his father learning how to be a successful cattle rancher. He did all that while attending Inola schools. There he enjoyed playing basketball, and was a member of the graduating class of 1947. After graduating, Gene went right back to work on the ranch. However one weekend after a hard weeks work, Gene decided to attend a dance at the Pryor Round Up Club. There he would first meet Donis Ford. They would begin dating and marry on January 5, 1951. The newly wed couple would settle in at the ranch and begin their life together. Over the next several years Gene along with his family kept the Stout Ranch growing. He would retire in 2015. In his spare time Gene had a few past times that he enjoyed. One of his favorites was attending the Monday night wrestling events in Tulsa. For many years he and his friends made that weekly trip. He also enjoyed the occasional trip to Tunica, Mississippi. Gene was also a member of the Pryor Elks Lodge. Often he and other Elks visited the veterans hospital in Muskogee and helped entertain many of the residents. He is preceded in death by his parents Herbert and Ruby Stout; daughter, Cynthia Whitecotton and husband Terry, and daughter-in-law, Mary Stout. Survivors include his wife Donis; son, Duane Stout; daughter, Sherrie Troyer and husband Jerry; grandchildren, Greg Stout and wife Evelyn, Stepahnie Hass and husband Jake, Clark Stout, Travis Troyer and wife Amber, Kyle Troyer and wife Ashley, Savannah Kennedy and husband Matt, Logan Whitecotton and wife Tiffany and 14 great-grandchildren. View and sign Gene's online memorial at www.mmsfuneralhomes.com

The family has asked for Masks to be REQUIRED at the visitation and service. The family will have masks available to those who need one.

Send flowers to the Stout family.