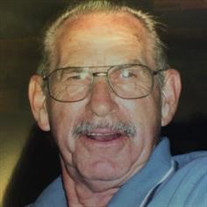 Visitation for Gerald "Gerry" Holland will be 1-6 pm Thursday, March 28, 2019, at Inola Funeral Home and Crematory. Gerry Holland was born March 30, 1934 in Westville, Oklahoma to Robert and Katie Holland. He passed away March 20, 2019 in Inola, Oklahoma, at the age of 84. He met Karen Alberts in high school, and they married on February 6, 1954. They had two children, Cheryl and Jim. They moved from Whittier, California to Inola, Oklahoma in 1971. Together they opened Triple H Auto in downtown Inola in 1983. They retired from this business in 1996. Gerry is preceded in death by his beloved wife, Karen, father, Robert, mother, Katie, and great-grandson, Timothy George. He is survived by one brother, Don Holland and wife June of LaMirada, California; daughter Cheryl Leber and husband Larry of Chelsea, Oklahoma; son, Jim Holland and wife Louise of Inola, Oklahoma, nine grandchildren; eighteen great-grandchildren; and three great-great-grandchildren. He is loved and will be missed.

The family of Gerald "Gerry" Holland created this Life Tributes page to make it easy to share your memories.

Visitation for Gerald &quot;Gerry&quot; Holland will be 1-6 pm Thursday,...

Send flowers to the Holland family.