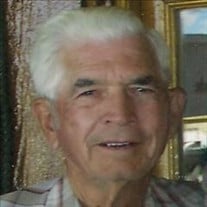 Services honoring and remembering the life of Granvill Daniel "Buck" Murray will be August 20, 2020 at MMS-Payne Funeral Home in Claremore. Burial will follow with military honors at Oakhaven Memorial Gardens. Viewing and visitation will be 5-7 p.m. on August 19 at the funeral home. Buck passed away with family by his side on August 11, 2020. He was 87. Granvill Daniel "Buck" Murray was born April 24, 1933 on a farm southwest of Mazie, Oklahoma to Charles William and Bessie (Cannon) Murray. He was named after both his grandfathers but was given the nickname "Buck" by his mother. Buck began his formal education in Chouteau. The family moved to Adair in 1946 where he met his lifelong friend, Tom Graves. In 1949, when Buck was beginning the ninth grade, his parents bought a farm in the Justus community, east of Claremore. It was at this time that he met a dark-haired, blue-eyed bashful girl that would later become his bride. Her family owned a dairy farm that adjoined his family's farm. Buck was a hard worker on the family farm and learned many skills that would serve him well later in life. While he was an excellent mathematician, he wanted to drop out of high school and travel to Oregon to work in the lumber mills. His parents discouraged this but finally gave in at the end of his junior year. He promised his mother he would complete his GED. He traveled to Oregon and worked for 8 months. He became home-sick and moved back to Claremore. He and that dark-haired, blue-eyed girl, Lorene Shrum were married in 1953. He and Lorene celebrated 67 years of marriage this past January 10. In May 1953, Buck joined the United States Army Corp. He completed Basic Training as a cannoneer at Camp Chaffee, Arkansas. He received orders to Korea but the Armistice Agreement was signed in July, just 6 weeks before his departure date. He was transferred to Fort Polk, Louisiana in September, 1953. In 1954, Buck was transferred to Fort Campbell, Kentucky. His wife and first-born daughter joined him at base housing in May. His superior officer told Buck that he could earn an extra $50.00 per month if he completed training to be a paratrooper. With a new child to support, Buck thought this was a good idea. However, he has shared that he was always one of the last to jump from the plane and always asked someone to push him out. He jumped with his eyes closed. It was also during this time that he fulfilled his promise to his mother by completing the requirements for his GED. Later, he was transferred to Camp Rucker, Alabama. It was here that he fulfilled his active duty commitment to the Army and was honorably discharged in May, 1955. He served in the Standby Reserve of the United States Army Reserve and was honorably discharged in June, 1961. Upon his honorable discharge from active duty, Buck returned to his family, moved to Tulsa and worked at the Tulsa Auto Hotel. He enrolled in Oklahoma State Technical School in Okmulgee and completed the training course in refrigeration, air-conditioning and heating. He immediately re-enrolled in the electronics training course. He believed the more training he had, the better job he could perform. Upon completion of his training, he and his family moved back to Claremore so the children could be close to grandparents. He went to work for Melton's Heating and Air in Pryor. In 1961, Buck and Lorene began Murray's Heating and Cooling. He was meticulous with his work and enjoyed many return customers. He always said, "Anything worth doing is worth doing it right the first time." Buck had a life-altering injury in 1980. When asked about his injury or when his girls or grandkids got hurt, he would say "I've had bigger spots than that on my eyeballs." His injury led to the sale of Murray's Heating and Cooling in 1981. Afterwards, he served many of his same customers and new ones, too, when he started Murray's Seamless Guttering. Buck retired in 1995. He and Lorene moved to Spavinaw on Lake Hudson in 1998. They returned to Claremore in 2007 to be closer to their four girls. Buck also served his community as a member of the Justus School Board for 20 years. He believed that a good education was paramount for a good life. He was a friend of educators and supported them in their classrooms. Buck was proud of his Cherokee heritage. In 2016, Buck had the honor of being chosen as a Cherokee Warrior. Buck, Lorene and their daughter Kathy made a trip to Washington, D. C. as part of the Cherokee Warrior Flight tour to our nation's military memorials. This was a tribute to his military service and a once in a lifetime experience in Buck's life. Buck's legacy lives on through the lives of his family and friends. We all would love to hear him say one more time, when asked how he's doing, "Better than nothing!" He is survived by daughters Janette Rose (Harold) of Fort Gibson, OK, Kathy Murray of Claremore, OK, Karen Cooper (Bruce) of Booneville, AR, and Deanna Dilldine (Tubby) of Claremore, OK. He is also survived by 9 grandchildren and 11 great-grandchildren. Buck was preceded in death by his loving wife Lorene, parents Charlie and Bessie, brothers Bill and Jack, sisters Martha Willhoite and Ruby Williamson, sisters-in law Julia and Mary, brothers-in-law Albert Willhoite and Jack Williamson, nephews Michael and Ronnie and niece Sandra. As an expression of sympathy, memorial donations may be made to the American Diabetes Association. Messages of condolence are welcomed at https://www.mmsfuneralhomes.com/obituaries/. In Lieu of flowers donations may be made to the American Diabetes Association at:

Services honoring and remembering the life of Granvill Daniel "Buck" Murray will be August 20, 2020 at MMS-Payne Funeral Home in Claremore. Burial will follow with military honors at Oakhaven Memorial Gardens. Viewing and visitation will be... View Obituary & Service Information

The family of Granvill Daniel Murray created this Life Tributes page to make it easy to share your memories.

Services honoring and remembering the life of Granvill Daniel...

Send flowers to the Murray family.