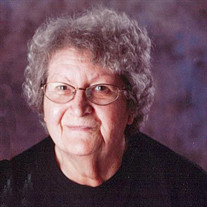 Funeral service for Ida Mae Boyd will be 2:00 pm Thursday, December 12, 2019, at MMS-Payne Funeral Home in Claremore. Burial will follow in Winganon Cemetery. Visitation will be at the funeral home on Wednesday, December 11, 2019, from 1-8 pm, with family receiving friends from 5-7 pm. Ida Mae Boyd passed away on Sunday December 8, 2019 at the age of 88. The daughter of Edgar and Martha Birge White was born November 1st, 1931 in Mayes county, Oklahoma. As a young girl she was raised in the Bushyhead community. There she would attend Bushyhead schools. As a young woman she met Vernon Boyd, and they married on September 12, 1951 in Claremore, Oklahoma. The newlywed couple began married life in Winganon, then moved to Talala for several years, before returning to Winganon, where they lived until Vernon's death in 1995. During their marriage, Vernon and Mae enjoyed socializing with friends and family, and taking an occasional trip. Mae was a wonderful mother, and her family was always her first priority. At their last Winganon home, Mae decided to take up gardening, and not only was she very successful at it, but became well known for it. During later years, she moved back to Bushyhead to live next door to her sister, Faye. She enjoyed watching her favorite TV programs and working word search puzzles. Sunday dinner became a family tradition, with all her kids, and sometimes grandkids, showing up as well. She is preceded in death by her parents Edgar and Martha White; husband Vernon Boyd; and siblings Raymon, Everett, and Jesse White, and Faye Davis. Survivors include her children, Wayne Boyd, John and Angie Boyd, Janice and Jim Collins, Vickie Phillips, and Tammy and Bodie Hunt; grandchildren Vickie Jo and John Forsberg, Jason and Angel Boyd, Jessica and Seth McIntosh, Jenni and Brent Foster, Josh and Lisa Phillips, Lacee Phillips, Allyssa and Ryan Floyd, Holly White, Courtney White, Brent and Autumn Hunt, Maddie Boyd; great-grandchildren Alex, Brynlea, Brecklyn, Aila, Brooklin, Amaeli, Torin, Za, Collin, Sophia, G., Mehenwv, Timber, Brielle, and Nevi; along with many other extended family members.

Funeral service for Ida Mae Boyd will be 2:00 pm Thursday, December 12, 2019, at MMS-Payne Funeral Home in Claremore. Burial will follow in Winganon Cemetery. Visitation will be at the funeral home on Wednesday, December 11, 2019, from 1-8 pm,... View Obituary & Service Information

The family of Ida Mae Boyd created this Life Tributes page to make it easy to share your memories.

Send flowers to the Boyd family.