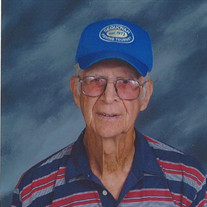 James Wesley Bradfield, Jr. passed away from this life into the arms of his Savior, May 17, 2020 at the age of 88. James was born to James Wesley Bradfield Sr. and Cora Lavada [Marchant] Bradfield 0n March 11, 1932 in a two room house in Fort Gibson, Oklahoma. Then around the age of seven James and his family moved to Claremore, where he attended Verdigris School. A few years later his family moved to Foyil. Now at the age of twelve, James and one of his friends got their first job working in the wheat field. They got paid $2.00 a day and worked from sunup to sundown. James also had to milk six or seven cows and feed the pigs every morning before he went to work in the fields. He worked in the wheat fields until he was sixteen years old. Then around the age of seventeen, James met Pauline Scott. In the years to come the couple began dating and married on March 29, 1952 in a Bentonville, Arkansas ceremony. The newlyweds returned home to the Foyil area, and began their future together. They were married 66 years before Pauline passed away in June, 2018. James had many different jobs throughout his life, but the two that he loved the most were when he was working for Peabody Coal Company as a heavy equipment operator and explosives expert from 1970 to the end of 1990. He also loved his job at Sequoyah Schools where he was a custodian and bus driver from 1990 to 2014. He was a hard worker at every job he had and loved being around people. He especially loved kids and giving hugs. James learned to fish when he was just a little boy with a cane, some string, and a hook with a worm or grasshopper. His passion for fishing grew and grew over the years. He had many fishing partners throughout his life. I'm sure they exceeded their limit a few times. He so enjoyed teaching his kids and grandkids to fish. His grandchildren were very special to him and he loved watching them play sports as well. James was a long time member of Washington Baptist Church. The last couple of years that he was able to attend church he would tell the pastor to come and look at a scripture and then say to him, "that says it all, doesn't it?". My dad's love for the Lord was evident in his everyday life. He loved to share the gospel and talk about the difference the Lord had made in his life. Those left to morn his passing are his children, Vicki J. Girkin and husband Brian, Stephen Bradfield and wife Deanna, Linda K. Sappington and husband Allan; grandchildren, Dewayne Littlefield and wife Selvia, Jason Littlefield and wife Hope, Mark Littlefield and wife Kellie, Brandon Bradfield and wife Kristen, Brett Bradfield and wife Kelsey, Tony Sappington and wife Jennie, Ryan Sappington and wife Krista, and Colton Sappington and wife Jessica. Also eighteen great-grandchildren and twelve great-great grandchildren. James is preceded in death by his parents, two brothers and 6 sisters. The family would like to thank the Memory Care Center at Emerald for taking such good care of our dad. We appreciate all of the nurses that were so kind to him. Friends may visit from 3:00 - 6:00 PM, Thursday, May 21, 2020 at the MMS-Payne Funeral Home in Claremore, Oklahoma. Private Family Services

The family of James Wesley Bradfield Jr. created this Life Tributes page to make it easy to share your memories.

James Wesley Bradfield, Jr. passed away from this life into the...

Send flowers to the Bradfield family.