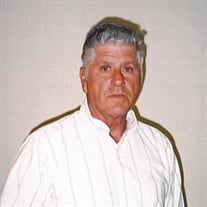 Service for James David Cupps will be 10:00 a.m., Thursday, February 25, 2021 at House of Prayer Holiness Church. Visitation will be at the church starting at 9:00 a.m., the morning of the service. Burial will follow at Washington Cemetery. James passed away at his home with his family by his side. He was 79. James Cupps was born March 19, 1941 in Coody's Buff, Oklahoma to Henry Davis and Laura Ellen (Price) Cupps. He attended school at Foyil and learned at an early age the value of a good days work. James married Geneva Ann Smith in 1961, they made their first home in Chelsea and later moved to Tulsa and this has been home since. A hard worker, James worked at several different glass plants through the years, retiring with Horner Glass. When he wasn't working, he enjoyed a good game of golf or relaxing at his favorite fishing spot. Most of all he loved spending time with his family. James had several sayings, one of which was "When you know it in your knower, you know it". He would also tell you that his quiver was full. Those family members that survive include his wife Geneva of their home, his children Raydean Cupps and wife Sunday, Danna Cox and husband Chuck, Jason Cupps, Sam Cupps and wife Laura, and Joy Cupps and fiance' Carl Phillips; his grandchildren Matt Cupps, Misty Cupps, Cody Russell, Michael Cupps, Colton Cupps, Thomas "Tommy" Cox, Samantha Oler, Benjamin Cupps, Emily Cupps, Gabrial Cupps, and Brixton Phillips; and 9 great grandchildren. James was preceded in death by his parents, daughter Emily Cupps; grandson Robby Russell; siblings Calvin Cupps, Henry Ray Cupps, Clair Weeks, Josephine Cupps, Mary Cupps, and Bertha Cupps.

Service for James David Cupps will be 10:00 a.m., Thursday, February 25, 2021 at House of Prayer Holiness Church. Visitation will be at the church starting at 9:00 a.m., the morning of the service. Burial will follow at Washington Cemetery.... View Obituary & Service Information

The family of James David Cupps created this Life Tributes page to make it easy to share your memories.

Send flowers to the Cupps family.