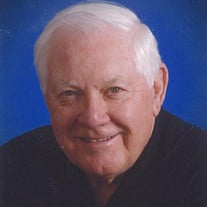 A Celebration of Life Mass for James “Jim” Daniel Dry will be held on Friday, April 29, 2022, at 1:00 pm at Saint Cecilia Catholic Church in Claremore, Oklahoma. Jim was blessed with a great life, a great wife, a great family, and great friends. Jim was born in Vinita, Oklahoma, on November 2, 1938, residing in nearby Afton, Oklahoma. A few years later, his parents, Harold and Ione Dry, moved to Dewey, Oklahoma, where he attended school and graduated from Dewey High School in 1956. He continued his education and graduated from Oklahoma State University in 1960 with a degree in hotel and restaurant management. He married his high school sweetheart, best friend, and the love of his life, Marylyn Ann Webb, on June 6, 1959. Jim and Marylyn were blessed with three children: Jamie, Dana, and Mike. Jim worked for Phillips and Saga Food Service while living in Bartlesville until 1974. In 1974, he accepted a promotion and the family moved to Houston, Texas. In 1977, he acquired an executive position with Stouffer’s moving to Hudson, Ohio. In 1980, Jim and Marylyn made the decision to move their family back home to Oklahoma. They chose to reside in Claremore where they have lived for more than 42 years. Jim was a man of strong character who always put his wife, family, and friends first. He so loved his three children and their families. He cherished his role as “PawPaw” sharing some of his happiest moments with his 8 grandchildren. As “GG Pa”, he was also proud of his 9 precious great grandchildren. Jim was an adoring husband and best friend to Marylyn for over 62 years. Their love story was rare, beautiful, and admirable to all. He was asked countless times how he and Marylyn stayed so in love for so long. His answer was always full of wisdom and truth… “We stumbled a lot. We picked ourselves up and put our heads down. And many times, we kept our mouths shut. It ain’t easy, but there’s a thing that happens when you are first married that you’re in love all the streets are paved with gold. You have no problems. And then comes the kids. This turns everything upside down. After you manage that, and you see the last one drive off to college, you look at one another. Over a short period of time, you determine you really like one another. Like is a lot better than love. There are many forks in the road that you come to, but you must share it. You can’t give 100%. You’ve got to give 110%. It can’t be one way or the other. In all this time, you will strengthen your love and you really will strengthen your life. Once you get to that point, you can sit down and say, ‘I’ve been married for 62 years.’” We are at peace knowing that the road that led him home was paved with gold. Jim had many hobbies and rarely sat idle. He was always busy working on something. His friends have said that he had the unique gift of being both mechanically and artistically inclined which is a rare combination of talents. In his early years Jim did a lot of quail hunting with his granddad which became a lifelong activity with his children and grandchildren. As a young man, Jim was interested in cars. His interest led him to restore and collect antique cars, which included his complete restoration of a 1912 Model T Roadster that currently resides in a museum. Jim and Marylyn have always enjoyed collecting antiques. Jim was a book of knowledge and was always willing to share his expertise with others. He believed the fun of antiquing was “in the hunt”. Later, Jim found his childhood Red Ryder BB gun which prompted a new collection along with the hobby of BB gun restorations. He was fondly known as “The Daisy Doctor”. In attempt to promote gun safety, marksmanship, and the joy of shooting and owning your first BB gun, he founded the Daisy BB Gun Days at the J.M. Davis Arms & Historical Museum in Claremore. He collected and enjoyed toy trains and loved to see the amazement and sparkle in the eyes of everyone (children and adults) as he would run the trains. Although these hobbies have come and gone, Jim treasured lifelong friendships made through his hobbies. He was a gifted saxophone player, playing for the Dewey High School band. In the 1950’s, he separately formed a jazz band called The Saints. Later, he participated with friends and played in the 3rd Street Dixieland Band, the JT and the Big Band and even the Claremore Civic Band, all in Claremore. Any time we hear jazz music on the saxophone, we think of him. Jim was the life of a party with his jokes, stories, sense of humor, and contagious laughter. He passed away on January 4, 2022. He is missed greatly by his family and friends. We all know how much he loved us and rejoice in the fact that he had a happy and full life here on earth, has eternal life, and lives in our hearts forever. In lieu of flowers please consider donating in honor of Jim Dry to: J.M. Davis Arms & Historical Museum (Jim Dry Daisy BB Gun Day) P.O. Box 966 Claremore, OK 74017 Or A charity of your choice. Please share a fun fact or story about Jim in the comment area below.

A Celebration of Life Mass for James &#8220;Jim&#8221; Daniel Dry will be held on Friday, April 29, 2022, at 1:00 pm at Saint Cecilia Catholic Church in Claremore, Oklahoma. Jim was blessed with a great life, a great wife, a great family,... View Obituary & Service Information

The family of James "Jim" Daniel Dry created this Life Tributes page to make it easy to share your memories.

A Celebration of Life Mass for James “Jim” Daniel Dry will be...

Send flowers to the Dry family.