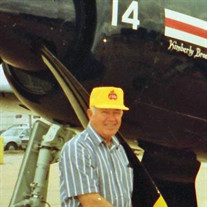 James was born on December 4th, 1926 to William and Dora York in Chelsea, Oklahoma, which is where he grew up. He was active in the local boy scout troupe and had a paper route in town. James graduated from Chelsea High School in 1945 and was drafted into the U.S. Army soon after. After the Japanese surrendered, he was given the opportunity to re-enlist in the Army Air Force as an airplane mechanic. As a propeller specialist, he was transferred to Wiesbaden, Germany. While on a short-term special assignment in Athens, Greece, he met the love of his life, Esther Boumi. After he was discharged from the Army Air Force, they were married in New York on October 1st, 1948. They then settled on his parents’ farm in Chelsea. His parents were living in company housing in Osage, Oklahoma and the farm hadn’t been worked for a couple of years. James and Esther cleared the fields, fixed the old house, and started a dairy. After a few years working the dairy and with money from James working at Douglas in Tulsa, they had enough money in 1954 to buy a farm outside of Skiatook. They continued the dairy at Skiatook until they were wiped out by a flood in 1959. After that, they only had beef cattle. James was laid off from Douglas after the flood so Esther worked at a pipeline company in Tulsa until James was hired on at American Airlines in 1962. James worked at American for 26 years until he retired in 1989. In 1976, the Army Corp of Engineers bought the Skiatook farm as it would be part of Skiatook Lake. James and Esther bought their next farm at Oologah where they lived until James went into Sterling House in Claremore in 2013. In his spare time, James worked the farm. He loved cutting wood, feeding cows, bailing hay and working with his bulldozer. After his retirement from American Airlines, he took up flying and he soloed successfully at Airman Acres. James is preceded in death by his parents, William and Dora York; wife, Esther and siblings William, Clark and Roger York, Tina Jones and Pat McDevitt. Survivors include his daughter, Petrina York and husband Robert Swain, Jr of Nashville, TN; son, James B York and wife Cinda of Derby, KS; grandsons, Brandon and Nathan York; brother Martin York, and Violet Cauthon. View and sign James’ online memorial at www.mmsfuneralhome.com

James was born on December 4th, 1926 to William and Dora York in Chelsea, Oklahoma, which is where he grew up. He was active in the local boy scout troupe and had a paper route in town. James graduated from Chelsea High School in 1945 and... View Obituary & Service Information

The family of James Franklin York created this Life Tributes page to make it easy to share your memories.

Send flowers to the York family.