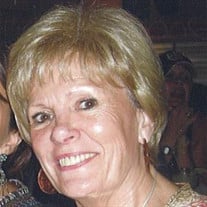 Service for Janet Martin Ferrel will be 2:00 p.m., Thursday, January 9, 2020 at Claremore Assembly of God Church. Janet passed away January 3, 2020 with her family by her side. She was 79. Janet was born August 24, 1940, in Tulsa OK, the second daughter of Maynard and Kathryn Branan. She is survived by three daughters and spouses, Debbie & Wade Allen, Christy & Larry Province, and Julie & Brent Davis; grandchildren Tiffany & Bryan Ottoson, Adam Province, Jeremy Davis, Jenny Allen, Jarrod Davis, Cole & Brittany Province, Jessie & Scott Martin, John & Karey Province, Beau & Lauren Davis, Katie & Derek Hillman, Casey & Haley Davis, Rocky Allen; great-grandchildren McKenna, Jared, Jace, Van, Tyler, Riley, Cash, Gracyn, Rocky, Krew, Eastin, Reese, Hayze, and Jocelyn; sisters Carolyn Frosco and Kathy Crabtree, and Barbara & husband Bill Dicks. She was preceded in death by parents Maynard Branan and Kathryn Lowrance, husband Ronnie Martin, brothers-in-law Floyd Crabtree and Keith Frosco. Janet attended school in Claremore, Oklahoma where she grew to love history. Always a history enthusiast, she loved dragging her girls to museums, stopping at every historical site she spotted, and watching endless history specials. She was happiest when she was surrounded by her family. She and her sisters loved piling all the kids in the car and taking off to one of their many places of adventure and chaotic fun (where they might just leave short a kid or two). With a family of all girls, she became a pro at hosting elaborate birthday parties, party till you drop slumber parties, and walk your legs off shopping excursions. She was blessed to be the grandmother of twelve, who were her pride and joy. Holidays and birthdays were her favorite, with everyone crammed into one house for as many days as she could get them. Another of her many loves was good food and Pepsi, which earned her the nickname “Pepsi Legs” at a very young age. Her love of food created a woman that could literally spend an entire day in the grocery store. However, the beautiful daily meals she so lovingly prepared for her family made those hours grocery shopping worth while. She was a very kind soul. She knew the value of a smile and compliment and made sure to give them out generously. As a woman of faith, she prayed continuously for others' happiness, and spread as much joy as she could. She held true to her favorite saying “If you can’t say anything nice, don’t say anything at all". However, her great sense of humor couldn't keep her from taking a jab or two for a good laugh. She took great pride in her appearance, always dressed to perfection with grace and poise, which led her to open her own boutique in the 1970’s, when few women ventured into the business world. With age and fewer responsibilities, one of her greatest joys was monthly outings and yearly trips with her sisters. They would spend this time to reconnect, share memories, and laugh hysterically at themselves. They enjoyed the attention they drew from strangers as they observed their silly fun. She loved life and showed admirable strength as she battled a brain aneurysm, breast cancer, a broken neck, and kidney failure. She was determined each time to take back the life she wanted to live. In the end, as a woman of faith, she accepted Gods plan and was at peace. However, in true fashion she showed great strength even in her final hours, holding on until all three of her girls were with her, letting them know what a great pleasure it was being their mother and making sure they were at peace as well. Though her beautiful smile and loving spirit will be greatly missed here on earth, heaven has gained one amazing angel.

The family of Janet B. Ferrel created this Life Tributes page to make it easy to share your memories.

Send flowers to the Ferrel family.