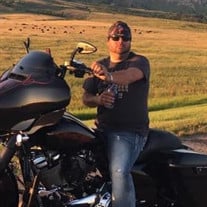 Funeral service for Jason Wayne Trude will be 10:00 am Monday, November 25, 2019, at MMS-Payne Funeral Home in Claremore. Burial will follow in Graham Cemetery, Pryor, Oklahoma. Visitation will be at the funeral home from 1-6 pm on Sunday, November 24, 2019, with family receiving friends from 4-6 pm. Jason passed away in Harrisburg, PA, on Saturday, November 16, 2019. He was 39 years old. The son of Larry Gene Trude, Sr. and Linda Kay (Ball) Wilson was born August 7, 1980, in Claremore. He was an adventurous child as he grew up. He attended school in Claremore, Osage, and Pryor, finally finishing at Claremore High School in 1999. After high school, he attended Rogers State College, studying Criminal Justice. His first occupation was building athletic tracks. In 2009, he attended truck driving school. In September of 2012, he began driving for Prime Trucking. He eventually was able to purchase his own truck, and continued driving for Prime, even being hired by them to train new drivers. In September 2015, he met Marichu Ytic Baco in the Phillipines, and they were married on December 31, 2016. They made their home in Tulsa. In his spare time, Jason loved hunting, fishing, and motorcycles. He enjoyed riding his Harley, and was currently building a 76 Ironhead. He also loved traveling, keeping his yard looking well, and spending time with his family and his dog, Kulit, a German Shepherd/Rottweiler mix. Jason is preceded in death by his grandparents. Survivors include his wife Marichu Trude; parents Larry and Marilyn Trude and Linda Wilson; his siblings Larry Trude Jr., and wife Melissa, Billy Trude, and Sarah Atchley and husband Josh; step-siblings Sherri Grisham and husband Rick, Kathy Marlin and husband Matt, Jan Clifton, Jerry Thomasson, and Steven Thomasson and wife Tiffany; nieces and nephews Hayden, Hannah, Sam, Dakota, and Ethan Trude, and Shane Atchley. View and sign Jason's online memorial at www.mmsfuneralhomes.com.

Funeral service for Jason Wayne Trude will be 10:00 am Monday, November 25, 2019, at MMS-Payne Funeral Home in Claremore. Burial will follow in Graham Cemetery, Pryor, Oklahoma. Visitation will be at the funeral home from 1-6 pm on Sunday,... View Obituary & Service Information

The family of Jason Wayne Trude created this Life Tributes page to make it easy to share your memories.

Funeral service for Jason Wayne Trude will be 10:00 am Monday,...

Send flowers to the Trude family.