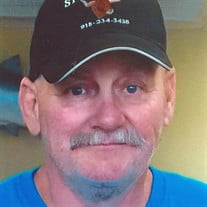 Memorial service for Jeff Fleeger will be 10:00 a.m., Saturday, August 7, 2021 at MMS-Payne Funeral Home Chapel. Jeff passed away on Sunday, August 1, 2021. He was 59. Jeffrey B. Fleeger was born December 13, 1961 in Tulsa, Oklahoma to John and Georgia (Zimmerman) Fleeger. Jeff attended schools in Claremore and graduated with the class of 1980. He was active in school sports, baseball, football, and wrestling and was quite the athlete. Following his graduation, Jeff worked for Worthington Cylinders for a time and later began working as a farmer and rancher. He also was a self-employed over the road truck driver. Jeff enjoyed life, whether riding horses, hunting, or just being with friends and family, he lived every moment to the fullest. He was hard working and might have been a little ornery. Those family members that survive include his mother Georgia Fleeger; his children Dana Kuroye and husband Steve, Tara Fleeger, Stephanie Balance, Meagan Figg, Jeffery B. Fleeger, Jr., and Brianna Fleeger; his grandchildren Kayleigh Beasley, Malakye Lingren, Damion Alberti, Jayme Dost, Kennedy Haney, Reagan Haney, and Jackson Fleeger; great grandchildren Madison Beasley, Huntleigh Beasley, and Tytan Lingren; siblings Karen Knowles and husband Tim, Bert Fleeger and wife Linda, and John Fleeger and wife Pam; his beloved dog, Mac and numerous nieces, nephews, and other extended family. Jeff was preceded in death by his father John Fleeger and his half sisters Susan Fleeger and Ann Fleeger.

The family of Jeffrey Fleeger created this Life Tributes page to make it easy to share your memories.

Send flowers to the Fleeger family.