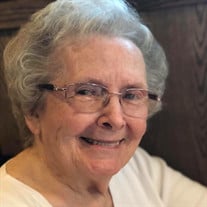 Memorial service for Jennie Britt will be 2:00 p.m., Friday, May 14, 2021 at MMS-Payne Funeral Home Chapel. Jennie went home to be with the Lord on Sunday, May 9, 2021. She was 88. Born March 18, 1933 in Guthrie, Oklahoma to Ollie and Esther (Walker) Simpson, Jennie's family moved to several different communities when she was young. They lived in Roosevelt for a time and later Snyder, where Jennie finished school. She married Bobby Jones in 1950 and to this union 2 boys were born. In 1982 Jennie married Ed Britt and they made Cookson home from 1994 to Ed's passing in 2011. Following Ed's passing she moved to Claremore to be close to her son Steve and his family. Jennie worked for PSO as a customer service representative, before retiring in 1994. A great mother, Jennie's first priority was her family. She made sure her boys had what they needed and attended each game or activity they were in. When it came time to be a grandparent, she embraced those little ones with everything she had, and enjoyed seeing them often. Jennie loved watching NCIS and Blue Bloods. Her music of choice was male country singers. She lived life to the fullest and liked the fact she was independent. This wonderful mother, grandmother, great grandmother, and friend will be missed by all who knew her. Those family members that survive include her sons Steve Jones and wife Cindy of Claremore and Jimmy Jones and wife Lethia of Macon, Georgia; her grandchildren Savannah Haddock and fiancée Jason Crandall, Sayre Whitaker and husband Billy, and Kenley Pearce and husband Dalton; great grandchildren Weston Haddock, Hadley Pearce, Parker Pearce, River Whitaker, Lilly Catt, Brett Whitaker and wife Courtney, Brittany Barbee and husband Justin, Bryce Whitaker and wife Cheyenne, Easton Crandall, and Evylen Crandall; two great great grandchildren JJ and Hadley Whitaker. Jennie was preceded in death by her parents, husband Ed Britt, grandson Taylor Jones and her brothers Carl Simpson and Vernon Simpson. Sign and view Jennies' online tribute at www.mmsfuneralhomes.com

The family of Jennie Vee Britt created this Life Tributes page to make it easy to share your memories.

Send flowers to the Britt family.