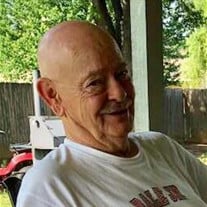 Funeral mass for Gerald Bacon will be 11:00 am Friday, October 4, 2019, at St. Cecilia's Catholic Church. Burial will follow in Woodlawn Cemetery under the direction of MMS-Payne Funeral Home and Cremation Service. Visitation will be at the funeral home from 5-7 pm on Thursday, October 3, followed by a rosary at 7 pm. Gerald "Jerry" Bacon passed away from this earthly world on Friday, September 27, 2019, at the age of 69. He was born February 12, 1950 in Claremore, Oklahoma, to Charles Bacon and Anna McCormick Bacon. He was preceded in death by his father. During his early years the family lived in Verdigris, until moving to Ohio. He attended primary school at Holy Family Catholic School in Huber Heights, Ohio, where he lettered in baseball and received the golden glove award as their catcher. He briefly attended the University of Dayton. He worked nearly fifty years as Custom Cabinet Design and Sales in Ohio, Texas, and Oklahoma. He excelled in this business, and many of his kitchen cabinets were featured in newspaper articles and magazines. He was a perfectionist when it came to details, earning him that reputation. He was a workaholic who was still working shortly before his death. After moving from Texas to Oklahoma, he met and married Peggy Boyd. They were blessed with a daughter, Ann Bacon. Jerry and Peggy shared a loving marriage for twenty-nine years. All of his life, he never lost sight of family, its duties, its joys, and its comforts. Jerry is survived by his wife Peggy of the home; his children Corey Bacon and wife Sharon of Springhill, KS, Kara Evertson and husband John of Santa Clara, CA, Sarah Shanks and husband Buddy of Coweta, OK, and Ann Bacon of Verdigris; step-children Elizabeth Rosebrough and husband Stuart of Verdigris, and Chris Workman of Sequoyah; siblings Gary Bacon and wife Suzanne of Dayton, OH, Terry Joe Bacon and wife Melinda of New Caney, TX, Tina Stetham and husband Monte of Bellbrook, OH; six grandchildren, four step-grandchildren, and several nieces and nephews. He was a wonderful and loving husband and parent. He had many loyal friends and customers. Jerry loved being a softball coach and teaching young girls the skills of the game. His teams won several tournaments and trophies. They welcomed many youngsters and players into their home. He was a role model to many. Jerry's life on this earth is over, but the legacy of his purpose and the many people affected by him will live on and on in our hearts forever. View and sign Gerald's online memorial at www.mmsfuneralhomes.com.

Funeral mass for Gerald Bacon will be 11:00 am Friday, October 4, 2019, at St. Cecilia's Catholic Church. Burial will follow in Woodlawn Cemetery under the direction of MMS-Payne Funeral Home and Cremation Service. Visitation will be at the... View Obituary & Service Information

The family of Jerry Bacon created this Life Tributes page to make it easy to share your memories.

Funeral mass for Gerald Bacon will be 11:00 am Friday, October...

Send flowers to the Bacon family.