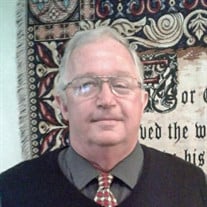 Jerry "Jody" Wayne Bentley, Jr., went to be with his Heavenly Father on April 21, 2020.  He was 60. Graveside service will be 2:00 p.m., Friday, April 24, 2020 at Owalla Cemetery.  Friends may visit at the funeral home on Thursday, April 23 from 5pm-7pm. Jerry “Jody” Wayne Bentley Jr was born on February 14, 1960 in Claremore, Oklahoma to Jerry Benltey Sr and Mary Raye Brown Bentley.  He went to Sequoyah for all 12 years of school and graduated in 1978.  He grew up riding motorcycles and played football at Sequoyah.  In high school, he met the love of his life, Nancy.  Jody and Nancy were married on July 20, 1979 and had two children, Angela and Joey.  He was a very loving and dedicated father to his children.  He was a fantastic coach in life and sports, encouraging his children to go above and beyond   Jody worked with his grandfather, Junus Bentley, his father, Jerry Bentley Sr, and his uncle Don Halfhill in construction for many years, pouring concrete and construction.   Jody also worked for his uncle Ira Green for a bit of time.  He loved the architect side of the construction.  This led Jody to take extended drafting classes which he thoroughly enjoyed and helped him design the Rogers Baptist Association building in Claremore, Oklahoma.   In his early 30s, Jody surrendered to preach after taking two trips to Guatemala.  He was licensed and ordained to preach at First Baptist Church, Oologah.  He began his ministry in Alabama working as Mission Service Corp through the North American Mission board. Jody became the Director of Missions for a small association in Alabama during this time.  In Alabama, Jody began doing disaster relief work after several hurricanes and this continued throughout his life.  He earned a yellow cap, blue cap, and chaplain for his involvement in disaster relief.  After hurricane Katrina, Jody became very active in FEMA.  He also preached at several different churches both in Alabama and Oklahoma.  He was currently the pastor at Sequoyah Baptist Church where he deeply loved his church family.  He cherished the fellowship and the ministry, and he loved the fellowship with the men at Sequoyah Baptist Church. His hobbies included wood working, visiting with his dear friends, and visiting church members.  However, his favorite thing to do was spend time with his grandchildren playing games outside, playing UNO, riding and playing in his truck, building legos, trips to Walmart and the “Wobby Nobby”, and watching them grow up.   Jody is survived by his wife Nancy Bentley of 41 years, his daughter Angela Nowlin and husband, David Nowlin of Celina, Texas, his son Rev. Joey Bentley and wife Kim Bentley of Anniston, AL, his five grandchildren who he adored: Matthew Nowlin, Joshua Nowlin, Bethany Bentley, Caleb Nowlin, and Jonathan Bentley, his father Jerry Bentley Sr and step mother Debbie Bentley of Claremore, his sister Judy Bentley of Claremore,  his step brother BJ Bentley and family of Montana, his aunts/sisters Joanne Green of Claremore, Melissa Owens of Claremore, and Jeanne Gramman of Florida, and so many family members and friends.  He was preceded in death by his mother Mary Raye Brown Bentley, his grandfather Junus Bentley, his grandmother Gussie Bentley,  his great grandparents Papa and Granny Bentley, his grandmother Mozelle Brown , his aunt/sister, Patty Halfhill, his uncle Ira Green, his uncle Bobby Bentley, his mother-in-love Pat Nickerson, Ken Nickerson, his sisters-in-law Linda Gladden and Nena Wells, and many other extended aunts and uncles.

The family of Jerry Wayne "Jody" Bentley Jr. created this Life Tributes page to make it easy to share your memories.

Jerry &quot;Jody&quot; Wayne Bentley, Jr., went to be with his Heavenly...

Send flowers to the Bentley family.