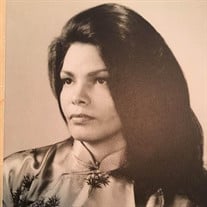 Jerry “Suzie” Alice Crittenden, 78, of Claremore, OK passed peacefully on May 15, 2021 to be with her Creator. She was born September 14, 1942 at Claremore Indian Hospital to Leo Clay McGraw, Sr and Geneva Henson McGraw. Jerry was named after her aunt, Geraldine “Jerry” Birdsbill, but given the name “Suzie” early in life. She was raised in Claremore and Tulsa by her aunt, Ruth Henson, and uncle Gordon “Doc” Henson, and graduated from Sapulpa High School. She was a proud Cherokee Nation tribal citizen of the wolf clan. She showed commitment to her culture by making shawls, art, and passing history and stories on to future generations. Suzie was an accomplished Cherokee artist, and her works were well known throughout Indian country, and was also very active in the Cherokee community. Suzie was a proud member of the Civil Air Patrol in Myrtle Beach, SC. She loved bingo, martial arts, her family, and giving to others. She moved to Tahlequah in her later years to be closer to her Cherokee kin. She is a descendent of some Trail of Tears survivors, including George L. Henson, and Alice Grass McGraw. Suzie was also of Choctaw heritage. She was preceded in death by her husband Randy Crittenden, parents Leo Clay McGraw Sr. and Geneva Henson McGraw, siblings Blanche Robertson, Larry McGraw, and Leo Clay McGraw, Jr. She is survived by her 2 children Darin Hardy and Brandi Carothers, 3 grandchildren Taylor Hardy, Cody Hardy, and Brooke Barber, aunt Geraldine Birdsbill, as well as many friends, cousins, nieces, nephews, and great-grandchildren. Suzie will be forever loved, and forever missed. Visitation will be at MMS-Payne Funeral Home on Monday, May 24, 2021 at 4pm-7pm, a rosary will began at 7pm.  Funeral mass will be held at St. Cecelia Catholic Church in Claremore, OK on Tuesday, May 25, 2021 at 11am, followed by a graveside service at Woodlawn Cemetery in Claremore, OK. Meal to follow at St. Cecelia Catholic Church.

Jerry &#8220;Suzie&#8221; Alice Crittenden, 78, of Claremore, OK passed peacefully on May 15, 2021 to be with her Creator. She was born September 14, 1942 at Claremore Indian Hospital to Leo Clay McGraw, Sr and Geneva Henson McGraw. Jerry was... View Obituary & Service Information

The family of Jerry Alice Crittenden created this Life Tributes page to make it easy to share your memories.

Send flowers to the Crittenden family.