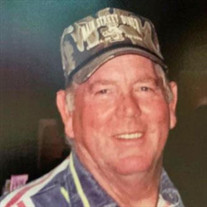 Graveside service for Jerry Morrison will be held 11:00 a.m. Wednesday, March 3, 2021 at the Chelsea Cemetery. Visitation will be held Tuesday, March 2, 2021 at the Chelsea Funeral Home from 1-8 p.m. with family greeting friends from 6-8 p.m. Wayne Jarrett Morrison known to everyone as "Jerry" passed away on Friday, February 26th, 2021 at the age of 78. The son of George W. and Mona (Bolender) Morrison was born May 18, 1942 in Longbeach, California. When Jerry was around the age of two, his family decided to move back home to Chelsea. There he would later attend Chelsea Schools, where he enjoyed playing football and baseball. He would graduate as a member of the class of 1960.  After graduating Jerry would marry Karen Williams. To this marriage three children were born, Tammy, Todd, and Duane. Several years later, Jerry would become a single man again. It was during this time in his life that he began visiting the Sugar Shack. Their fate would have it, and Jerry left his coat at the table. It just so happened that Pat would put it up and return it to Jerry on his next visit. The two would eventually begin dating and would marry on October 23, 1976. To this marriage two children were born, Christy and Jayme. Jerry worked hard to support his family. He spent most of his life welding and running heavy equipment. He worked for companies such as Hester Electric, Smithy's Construction, McNabb Coal.  However, most of his working career was spent with Peabody Coal, where he worked around 20 years before retiring.   Over the years Jerry had many hobbies and pastimes to keep him busy. When the boys were young, he helped coach little league baseball. He enjoyed working with his cattle on the farm. There were a few years when he and Pat did a little custom hay baling. He loved working in his shop. It was built on his parents' old home place, and it was just a happy place for him to hang out. He also had a love for deer hunting. This led him and a friend to build one of the best deer blinds around. It was so cozy that it too became a place to sit and relax, and he even watched football games on the tv if he so desired. However, spending time with his family is what he enjoyed the most. Jerry was a longstanding member of the First Christian Church of Chelsea. He is preceded in death by his parents George and Mona Morrison, daughter, Christy Ramsey; granddaughter, Josie Ramsey, brother-in-law, Jim Corle, and father-in-law, Leonard Corle. Survivors include his wife Pat; children, Tammy Ellis, Todd Morrison and wife Debbie, Duane Morrison and wife Colleen, Jayme Morrison and Tina Mitchell; grandchildren, Jarrett Morrison and wife Jacque, Eric Morrison and wife Beth, Hannah Morrison and Brian, Rachel Kirk and husband Mathew, Kyle Morrison and fiancé Tearia, Kyle and Gabby Proctor, Alex Ramsey and Rocckelle, Chloe and Colbe Morrison and Garrett Mitchell; great-grandchildren, Paityn, Parker, Noah, Landon, Caden, Ike, Christopher, Abigail, Jasmine, and Jermaine; mother-in-law, Lorraine Corle; sister-in-laws, Vicki Parker and Charlotte Smalley and husband Don, and cousin, Richard Morrison and wife Helga, son-in-law Don Ramsey and wife Jamae.

The family of Jerry Morrison created this Life Tributes page to make it easy to share your memories.