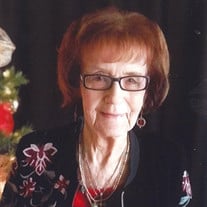 A Funeral Service will be held at the First Assembly of God Church in Claremore, Ok on Friday, August 6, 2021 at 2:00 p.m. Visitation will be held at the MMS-Payne Funeral Home Chapel on Thursday, August 5, 2021 from 1:00p.m. to 7:00p.m., Family will receive friends from 5:00 p.m. to 7:00 p.m. Jessie Jewell McKee Griggs-Fitts, “Judy” , 95; of Claremore; died on Saturday, July 31, 2021 while surrounded by many loving family members. Judy is survived by: son: Ronnie and wife Karen Griggs; daughter: Bonnie and husband Terry Stimson; daughter-in-law: Kathy Griggs; step-daughter: Cissy Gladden; daughter-in-law Lavonne Fitts; grandchildren and their spouses: Janie and Ryan Eaton, Stacie and Dan Rumsey, Kim and Gordon Montgomery, Tara and Destry Duff, Tyler and Kristen Griggs, Taylor and Megan Griggs, and Kristen and Donnie Back; sister Glenda and Peter Rachwall; brother Don McKee; sisters-in-law: Ida Bruce and Betty Fritz; brother-in-law: Bert Renfro; step-grandchildren Riley Fitts and Brandon Johnson; 28 great-grandchildren; 8 great-great grandchildren; and a host of nieces and nephews, friends, and cousins Judy was preceded in death by: husband Jack Griggs; son Joe Griggs; parents Jessie and Grace Bryant McKee; in-laws Ed and Essie Griggs; sister Linda Renfro, sisters and their husbands: Norma and Walter Penual, Grace and Bank Lankford; brother: Jim McKee; granddaughter and husband: Angela and David Tarpley; sister-in-law: Sandra McKee; husband from her second marriage: J.C. Fitts; and stepson: Jim Fitts Judy was born on November 22, 1925 in Quinton, OK to parents; Jessie L. McKee and Grace Rubel Bryant-McKee. Judy married Jack Carrol Griggs on December 1, 1945. The pair were married 51 years before Jack’s death on February 13, 1997. Jack and Judy started their life together in Seminole, then moving to Ulysses, Kansas, and finally purchasing their family home in Tulsa. Jack worked as a mechanic at Fred Jones Ford, while Judy began as a homemaker, taking in ironing and sewing for extra money. Jack also supplemented the family income by doing evening mechanic work in his garage. Together they had three children Ronnie, Bonnie and Joe. Judy made all of the children’s clothes and pajamas. Judy went to beauty school in 1958; graduating the next year. She worked a short time in a Tulsa salon while Jack and her dad added on a beauty shop to the family home. In 1959, “Judy’s Beauty Shop” was born. She kept the doors open until 2006. She continued to work until the age of 81. (1959-2006) In 2004, Judy married her friend, J.C. Fitts. They moved to Claremore in 2005 where they enjoyed a new home; and Judy decided to retire. Judy and J.C. enjoyed ten years of marriage in these golden years; before J.C.’s passing. Judy was active in her church, attending twice a week. She loved her Eastland Assembly of God Church and the people in it. Throughout the years, she stayed busy crocheting many afghans for babies, newlyweds, friends, and family. Judy or “Mimmie” as the kids called her, loved her whole family and prayed for each child, their spouse, grandchildren, great and great-great grandchildren each day. She loved her family, Jack’s and JC’s families

The family has asked those who have one of Jewels Afgans please bring them to the service as a tribute to her.

A Funeral Service will be held at the First Assembly of God Church...

Send flowers to the Griggs-Fitts family.